the French experience - my Epic Weekend

My sister and I decided to bring the kids to a short trip over the weekend. We hired Taipan tours agency for this tour for convenience since our destinations are predominantly french-speaking places.  This was besides the recommendations by my friends. Aboard this big nice coach we headed for a 9-hour ride. (butt hurts!) 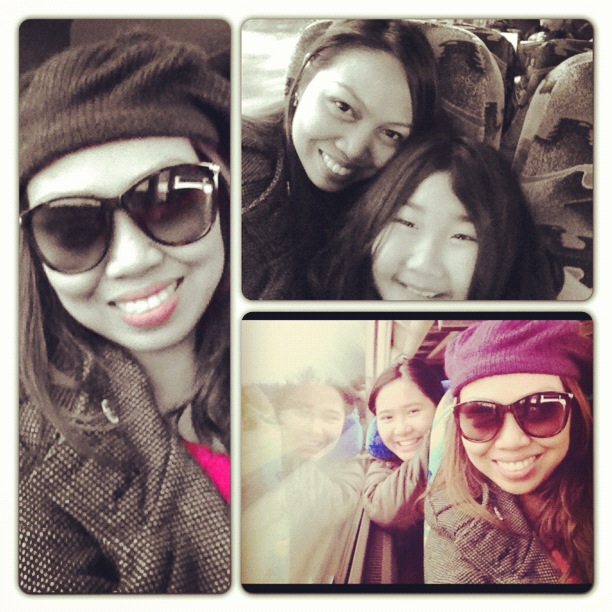 I am happy to have experienced a little of what to me is a French influence in these parts of Canada. We headed to Ottawa on our First day – "Canada’s capital city - a home to many of the world's cultures as thousands of immigrants from around the world have settled here". We went to the Parliament – a castle-like building where the prime minister’s office is. Around it are old big buildings made of bricks the looks of those in Europe, I would say. 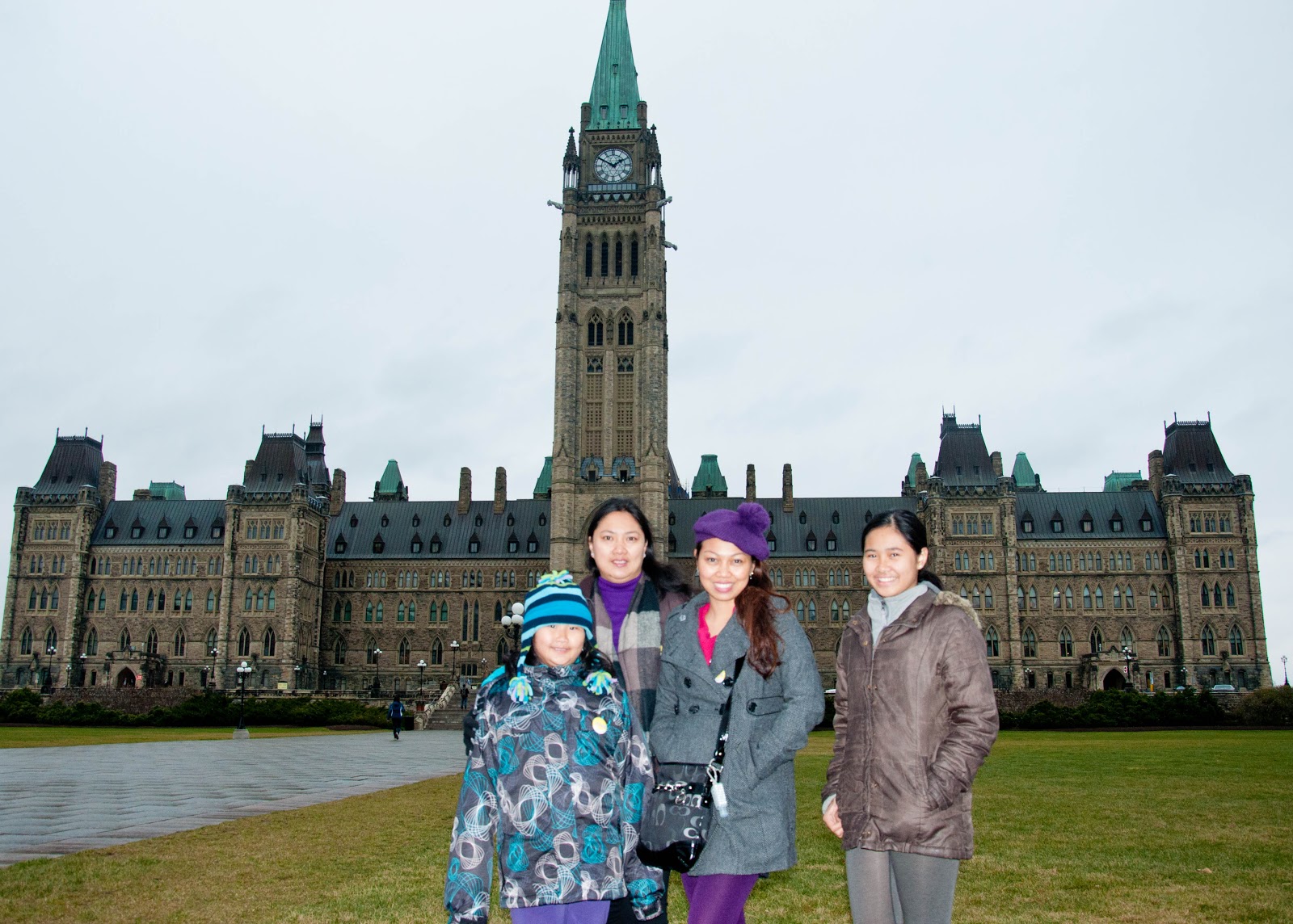 Then we went to this Canadian Civilization Museum. We’ll I am no fan of museums really but it paid coz we had the chance to take a photo of this beautiful scenery outside the museum doing some jump shots with the kiddos. 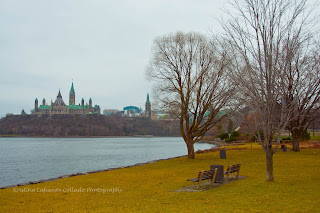 We capped the night at the Lord Burri’s hotel located at the city. We got an upgrade – yahoo! Thea slept beside me and she is the cutest thing on earth for me – so sweet and playful. I can spend all day playing with her. 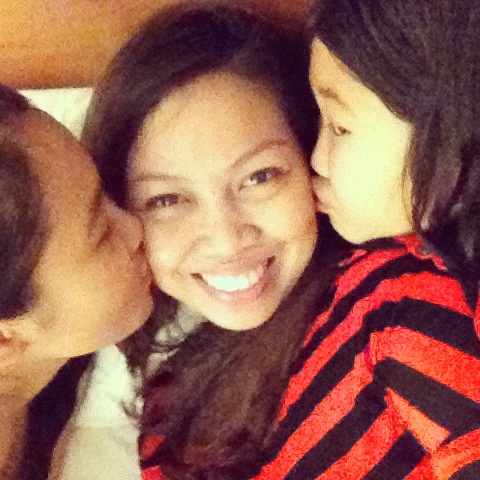 We spent our second day in the lovely Quebec, "Canada's second most populous province after Ontario and is the only Canadian province with a predominantly French-speaking population and the only one whose sole official language is French at the provincial level". First was in Montreal - "the largest city in the province, the second-largest in the country (after Toronto)" where we visited several big old churches to include St. Joseph Oratory (left below) where I had my first snow experience ever while Thea was taking a picture of me; and Notre-dame basilica - the church where Celine Dion held her wedding ceremony in 1994. 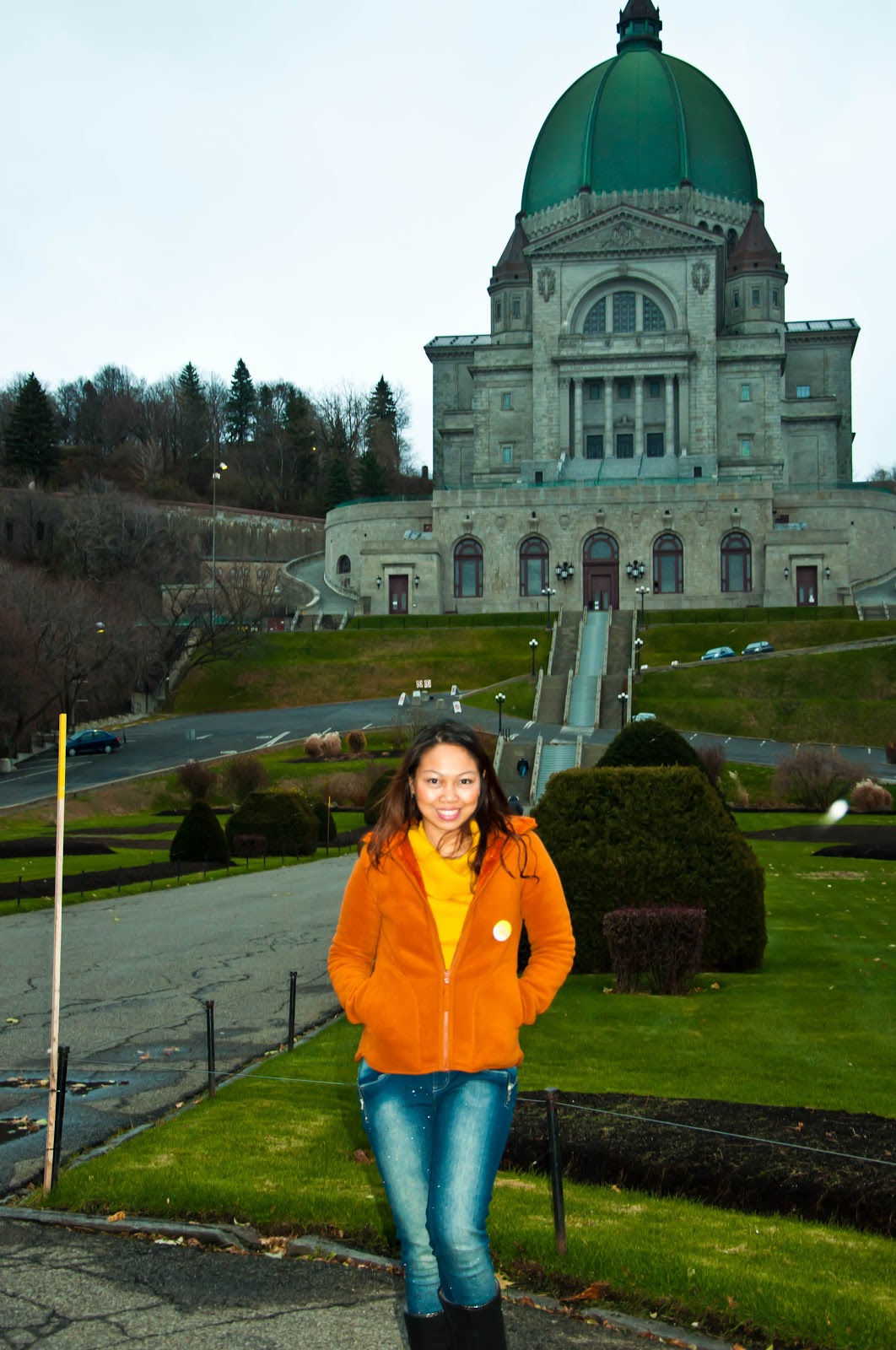 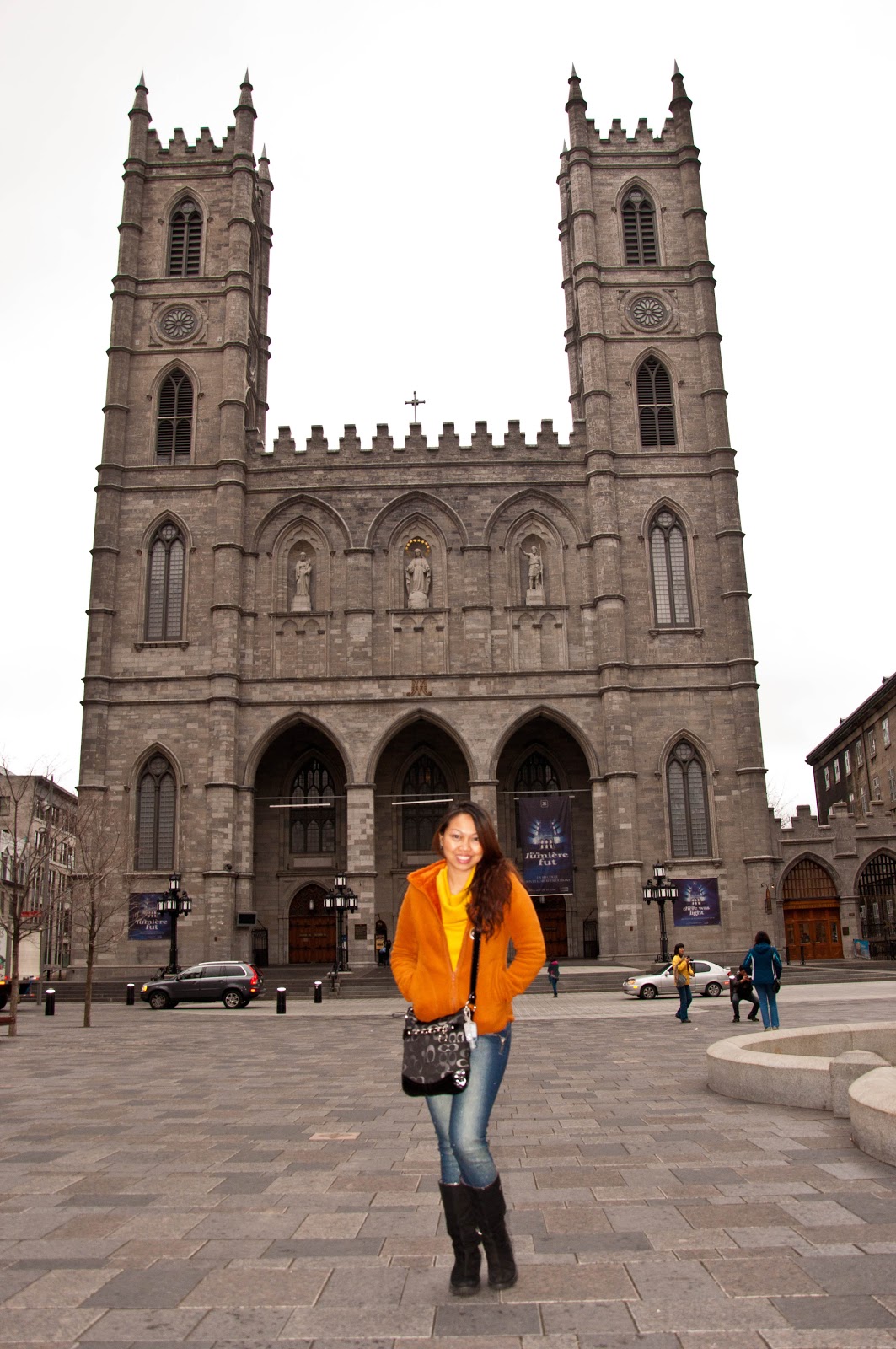 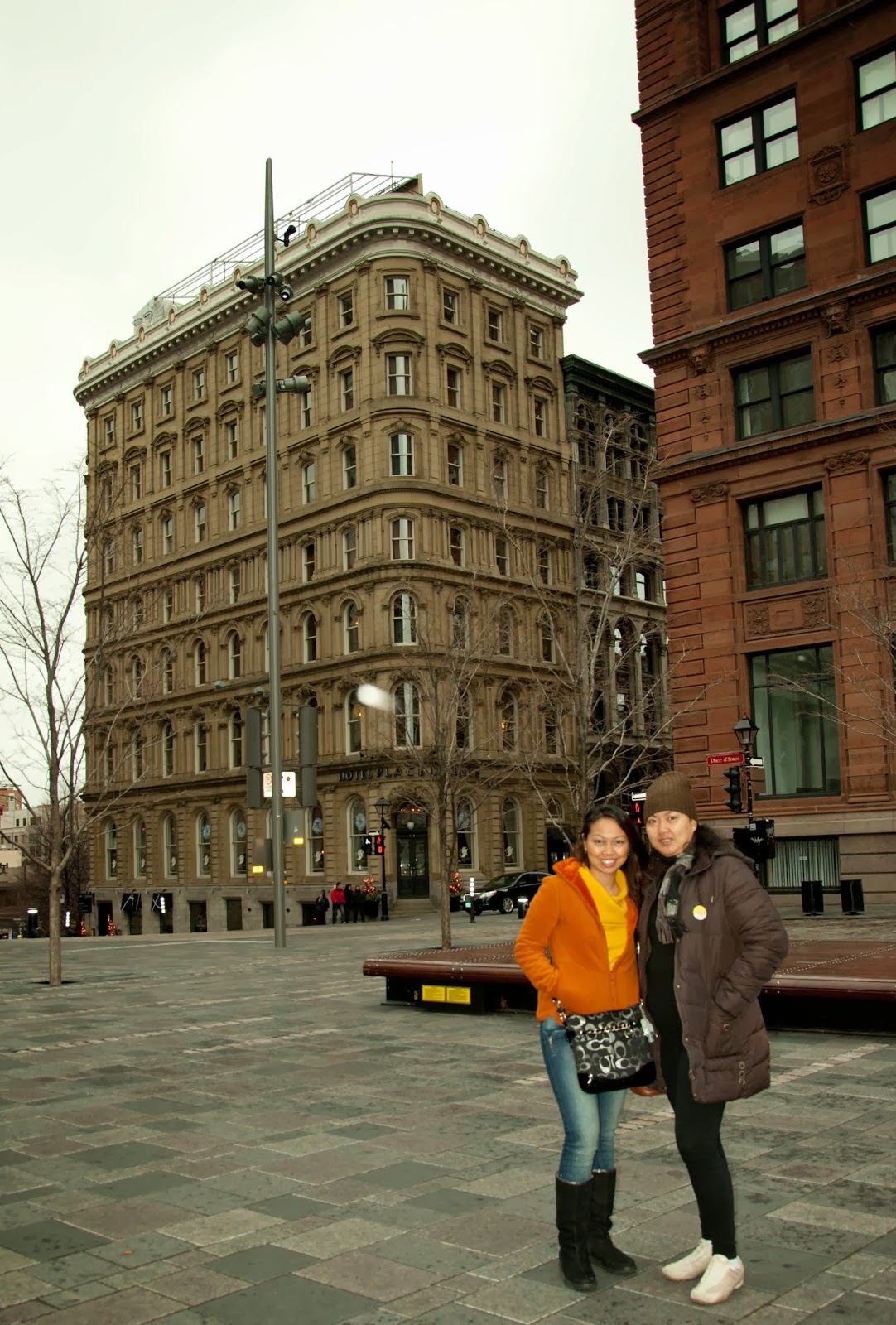 We had our last stop for the day at the old Quebec City where I was awed by the beautiful sights of the old edifices, which to me looked like the ones in Europe. The tour guide said it's the little Paris in that part of Canada. I love the romance in the air and I felt like Italy would be just a little more romantic than the place. At the very center you will see the city's magnificent castle-like hotel which has been considered as one of the attractions already as it is sitting on top of a slope overlooking an equally wonderful sight of fully lighted houses and establishments with the river running in the middle. 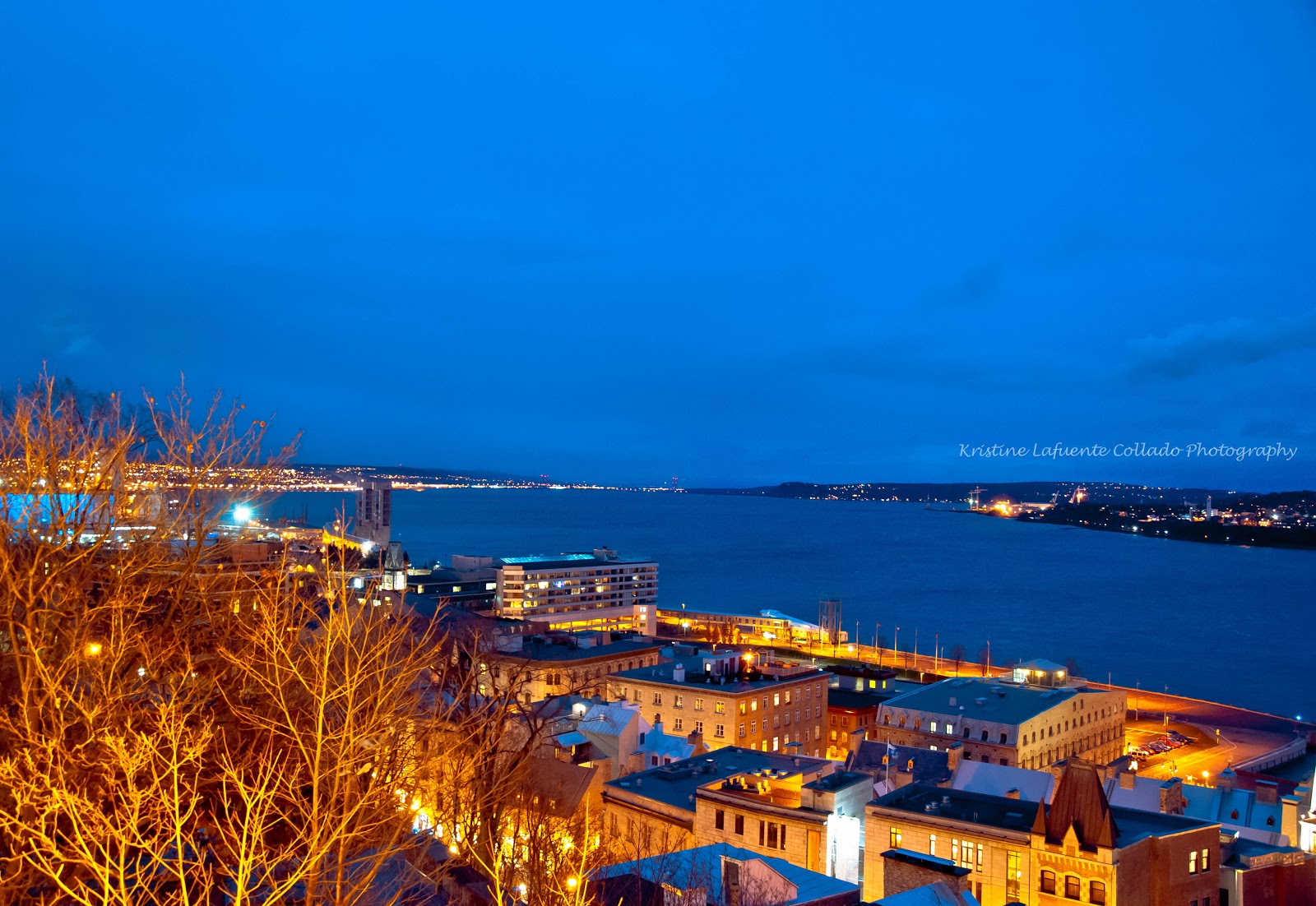 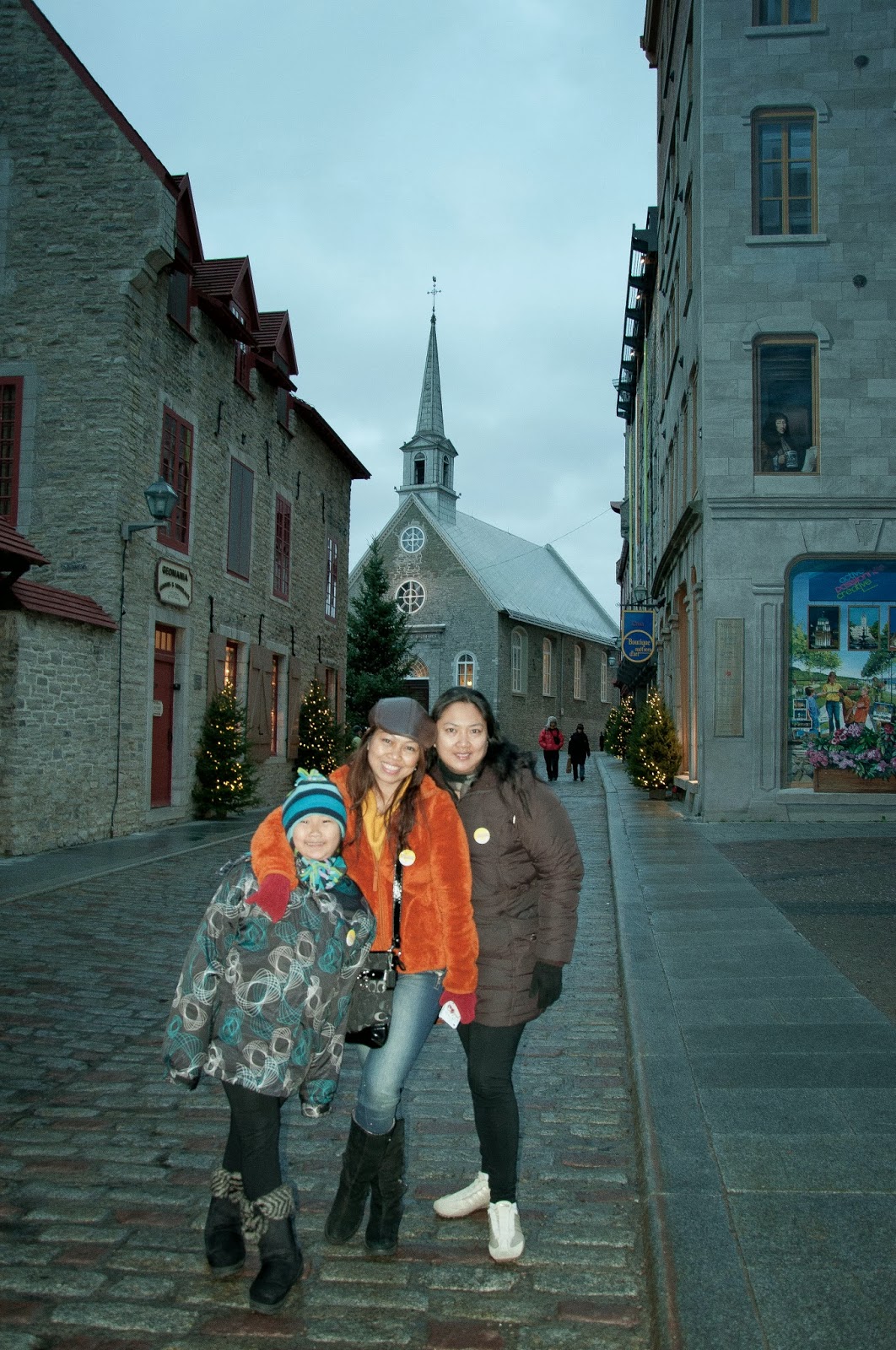 There were these narrow streets at the very heart of the city where little and big Christmas trees lighted up every corner. Christmas songs played and I can really feel the Christmas spirit all over the place. Everything was wonderful to look at. 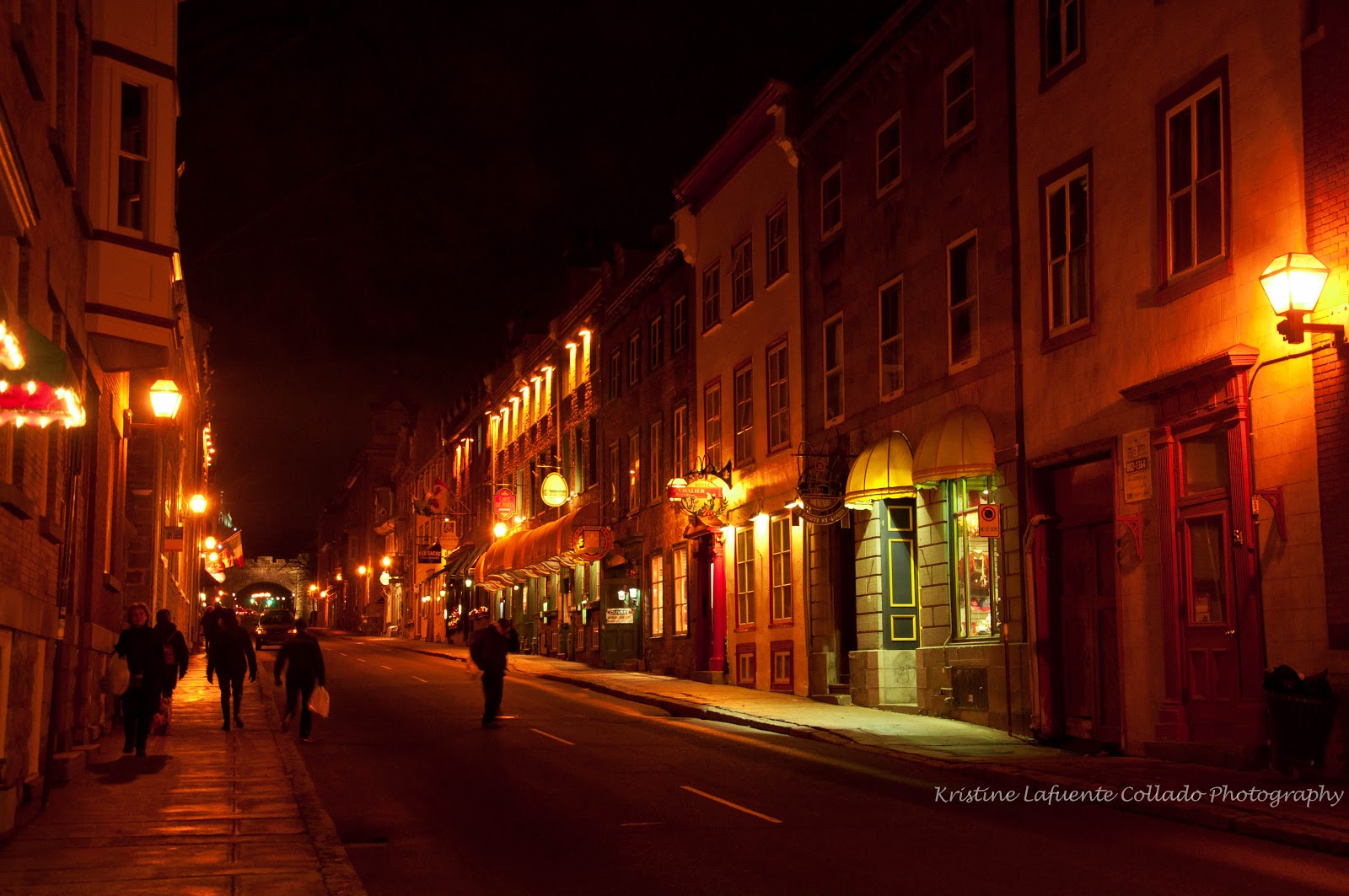 At dinner time, we headed to stroll by the streets further and looked for a fine resto where we can sit and wait for the next 1.5 hours. We found this nice little resto with free wi-fi. I tried the famous poutine - fries topped with ground beef in tomato sauce and it tasted so nice that my niece Chrissia just had it all to herself. Beside the fine meal, the people in this place are very warm and welcoming really. I can be as chatty as they are there. There is something in the atmosphere there that really captivated me - something like romance you'd feel even when you are alone walking in the streets. The city just makes me want to visit Europe all the more!

Then we headed onto our hotel which according to the itinerary is located at the country side. But voila! When we got there the hotel didn't even look like the one I expected - old and boring. Well, well, well. It had an indoor pool, Jacuzzi and the rooms are clean and big with the free wifi and a bathtub. Baby Thea wanted to swim at the pool and I wanted to take a dip too. But I didn't bring any bathing suit - well, how would I know that it is possible to go swimming at a pool on this winter season?! So I went to the reception and asked. The 2 gentlemen attended to me. (ahem!) So I went to ask, "Hi, do you have a boutique nearby that sells swimsuit?" And the other guy sitting (cutie, guessing he's around 25-28) smiled and responded, "that's an interesting question." chuckles. Then his face turned serious realizing perhaps that I was their guest. "sorry we don't have swim... blah" he stuttered and made face and couldn't even pronounce s-w-i-m-s-u-i-t. haha! his face looked funny but cute as he proceeded to correct what he's saying. My niece Chrissia who acts and thinks older than her age whispered to me, "tita, maybe he couldn't pronounce correctly coz he was imagining you on swimsuits already." and I laughed aloud like "haha!"

On Sunday morning we headed on with the tour and were greeted by the snow flakes outside our hotel.

Then off we went to Kingston, Ontario for our last stop and visited the Parliament there. 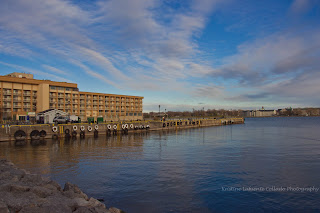 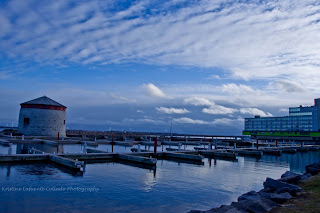 Overall, I just fell in love all the more that I could say, I have "rediscovered the romance in travelling" myself. Before I came over here in Canada, I really prayed for a blessed journey with God. I know He has prepared all these for me to experience Him through the amazing places and wonderful people I encounter. I am so blessed for this epic experience. :)