Tales of an Impatient Princess 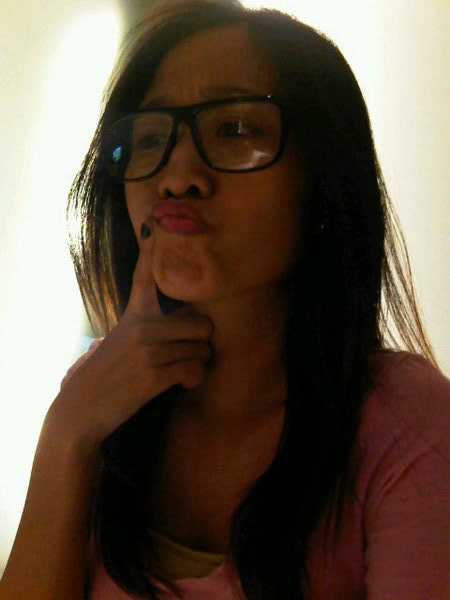 Ever wondered what's taking so long for Prince Charming to find his way to you? Errr, let me re-phrase my question, "have you even let a day pass not asking the universe where could he be at this time?!" (Por pabor! #angtagal #daratingpakayasiya #anongpetchana) uhuh. and the next question would be "what's taking him so long??" blah blah blah and like I can hear a number of other questions running in your head now.


Ok, well let's try to re-make our favorite fairy tale with a twist:


Once upon a time there lived a young lady, Cinderella. One day, the king announced a grand ball in search of the fairest maiden in the kingdom to be wed to his only son, the prince (e sino pa nga ba?). Upon hearing this, Cinderella wasted no time. And with the help of her fairy God-mother she made it to the ball dressed beautifully with her entourage.

As soon as she set foot in the palace, she went straight and presented herself to the prince. As expected she charmed the prince so they went to dance alone in the garden. While dancing Cinderella started telling him about herself, what she likes and dislikes, where she lives and even told practically almost her whole life story in just 30 minutes. Come midnight, the clock bell rang. And she had to leave. The prince knowing where to find her didn't bother much and didn't even chase her up to the carousel. He just kissed her hand and off she went.

Hmmmm... I can imagine Cindy spending sleepless nights wondering when will Prince Henry ring her. Yeap, she gave her mobile number she'd written on a piece of paper on their way to the palace. (#hindisiyaprepared!)


Have you ever felt that you needed to do the first move yourself because the guy seems to be not doing anything at all? And you answer me back with "C'mon, 1 subtle move shouldn't be too bold and obvious." Well, maybe we have to remind ourselves ladies that - Men are born hunters. (Real Men, that is!) They're all for the chase. They want to have some mysteries to unravel. No wonder, the ending to this tale remains to be the perfect one still - that is, the prince had no clue about her person and he desperately searches in every household in the kingdom for her. And when he finally found her, he feels more grateful to have her. 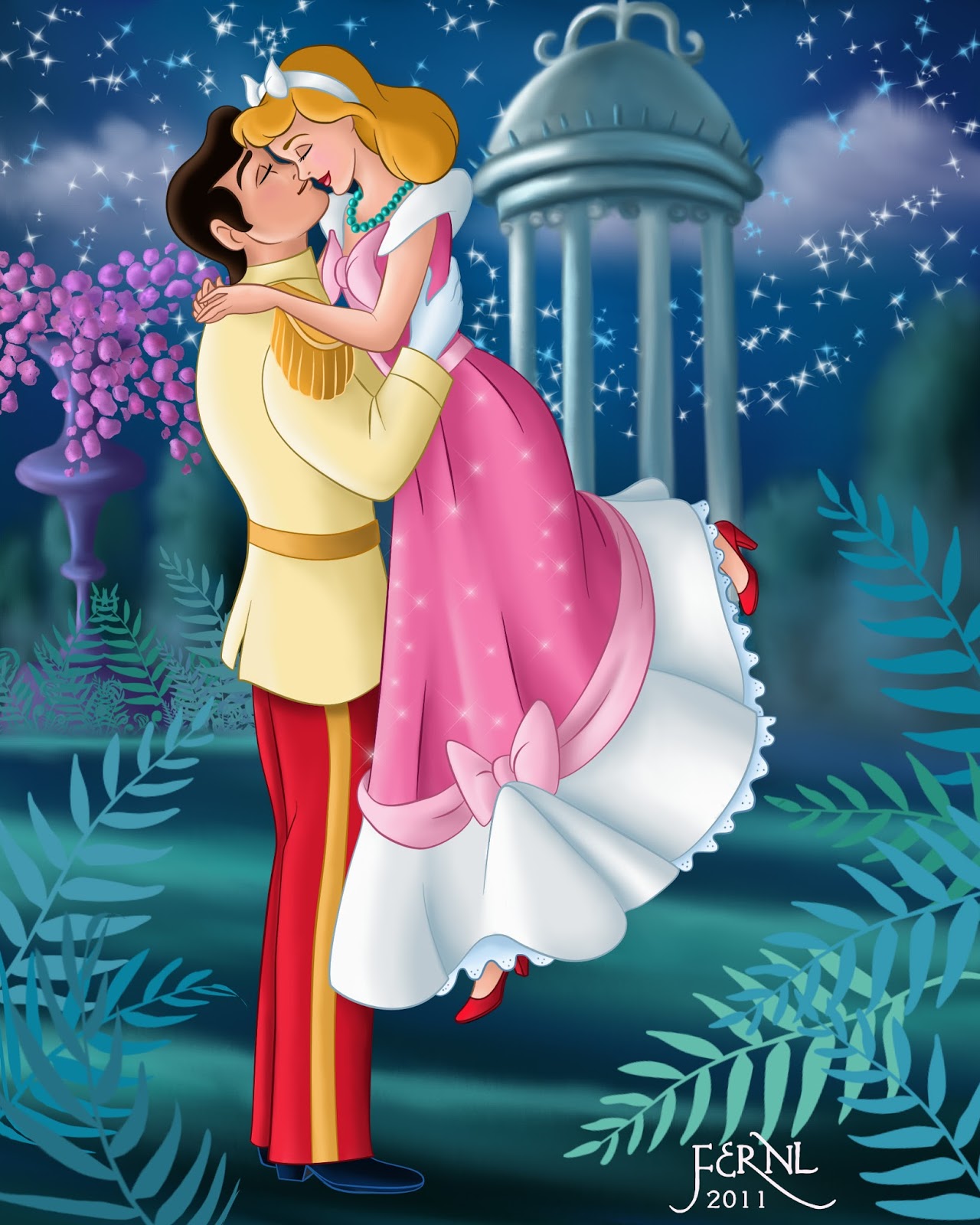 How did I know this? Well, I used to be a boy before. #joketyne I am no expert on this but yeah cliche as it is, I was guilty of making the first moves before. (dami ko lang moves!) I remember I was the one who called my ex to ask about our homework. Hellooo!!! There's like madami akong classmates to call kaya. Oh my G to myself! Yeah, and like I didn't even give him time to court me. I was like, "tayo na?" Shucks! Insert face-palm here. I believe women are more empowered these days to pursue what they want. Yet, I find that traditional still works better. Lesson learned: Let the guy pursue you. Give him time to discern. E what if the guy is like taking a decade to decide who to court or when to court? Well... that's another story. #literal

Once upon a time, in a far off land, there was a young lady named Gigi. Everyday she would stay by their window overlooking the alley outside where visitors from neighboring villages would pass by. Deep inside her, she had been wishing for the man of her dreams to come and find her. One day, there was a group of travellers passing by. She saw Roman, a young neat-looking man. He smiled at her flashing his charming smile. (#yannatalagaangkillerweapon #pafall-looks) Immediately her heart skipped a beat and then she fell in love. And so everyday she would stare outside the window waiting for Roman to pass by.

1.. 2..3 weeks had gone by and no shadow of Roman was seen. Gigi felt desperate and sad. She had sewn him a beautiful white handkerchief to give to him when she sees him again. One night, she overheard a man singing outside their house. It was Roman! But Alas! He was serenading Lina instead, her neighbor. Poor Gigi, her heart was broken. She wept and dropped her white handkerchief.

A passer-by named John, a handsome young man picked it up and reached for her face as she was sobbing uncontrollably. He wiped her tears dry. And that was the start of their love story. By the way, Roman works as the Principal Assistant to the King - who happens to be John's father.

See! God gives only the best! No less! Oh well, this may just be made-up stories but I know there is a Cindy and Gigi in all of us. And as always, there is a BIGGER PLAN, a SWEETER LOVE STORY for each one of us. We may have wept for some people or felt rejected or waited like forever for the right person, I still believe that when God gives, it will be to our heart's content or even exceedingly. He is the ultimate story maker! 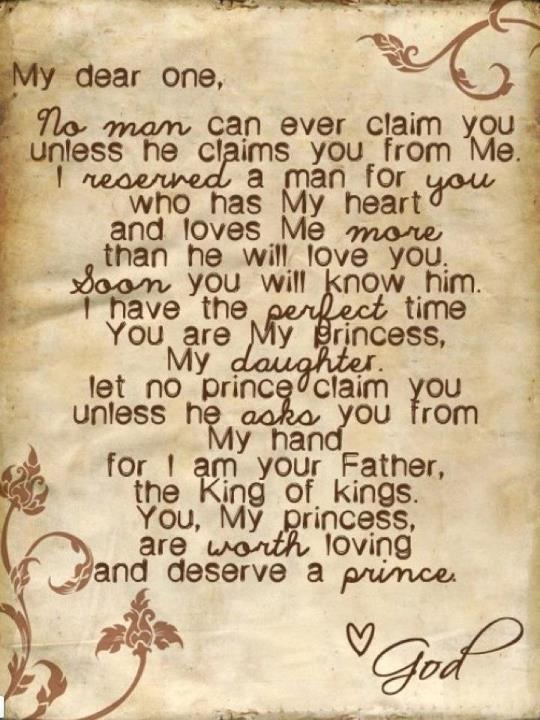 So chillax there princesses! In the meantime, keep yourself beautiful inside and out. Do what makes you happy. Treat yourself to a spa. Eat more. Shop your heart out. Tweet every second. (guess in which order this is) Travel the world. Watch a movie alone. Pray unceasingly. Stay more in love with life.

Remember you are God's Princess: A mystery to be revealed; a Relationship to be pursued; and a Beauty to be unveiled. You are His priceless possession.

Your worth is so hidden in Christ that a man would have to seek Him first to find you. Believe this! Tell yourself (and I will tell myself too!) that "I am God's Princess." After all, as they say, you have to treat yourself like a Princess in order to attract a Prince. :)