My Short and Sweet Escape to Dubai

As soon as I got the news that I was transferring to Toronto, I told myself that I definitely would have my layover in Dubai to visit my cousin, Princess/Diana. It would be nice to visit an unfamiliar place before I settle yeah.

However, I learned that the usual route would be to go from either HK, Korea then through the US. Dubai is usually a stopover for flights going to Europe or so I thought. But yeah being the strong-willed that I am I pushed for it and thankfully ended up having my very short escapade to the “Pearl of the Gulf” – Dubai.

So it was with a heavy heart that I left Changi on the midnight of the 9th. I was all sad and excited at the same time.

I reached DXB airport at around 5:15 a.m. their time. I waited for like an hour there for my cousin to fetch me. And when I finally saw her I was just so happy and hugged her. We haven’t seen each other for about 2 years then. Plus, I learned about a good news from her.

We reached their apartment at around 7 a.m. just in time before the kids by my cousin Kuya Em went to school. The girls were adorable. Anyway, we went off an hour later and Princess and Erickent, my cousin-in-law forever (that’s what he wants me to call him) decided that we go to Abu Dhabi to visit our other Tita so I can see the beautiful palace hotel. Sheeps! The heat was so up at 10 a.m. The road trip took 2 hours to reach Abu Dhabi. 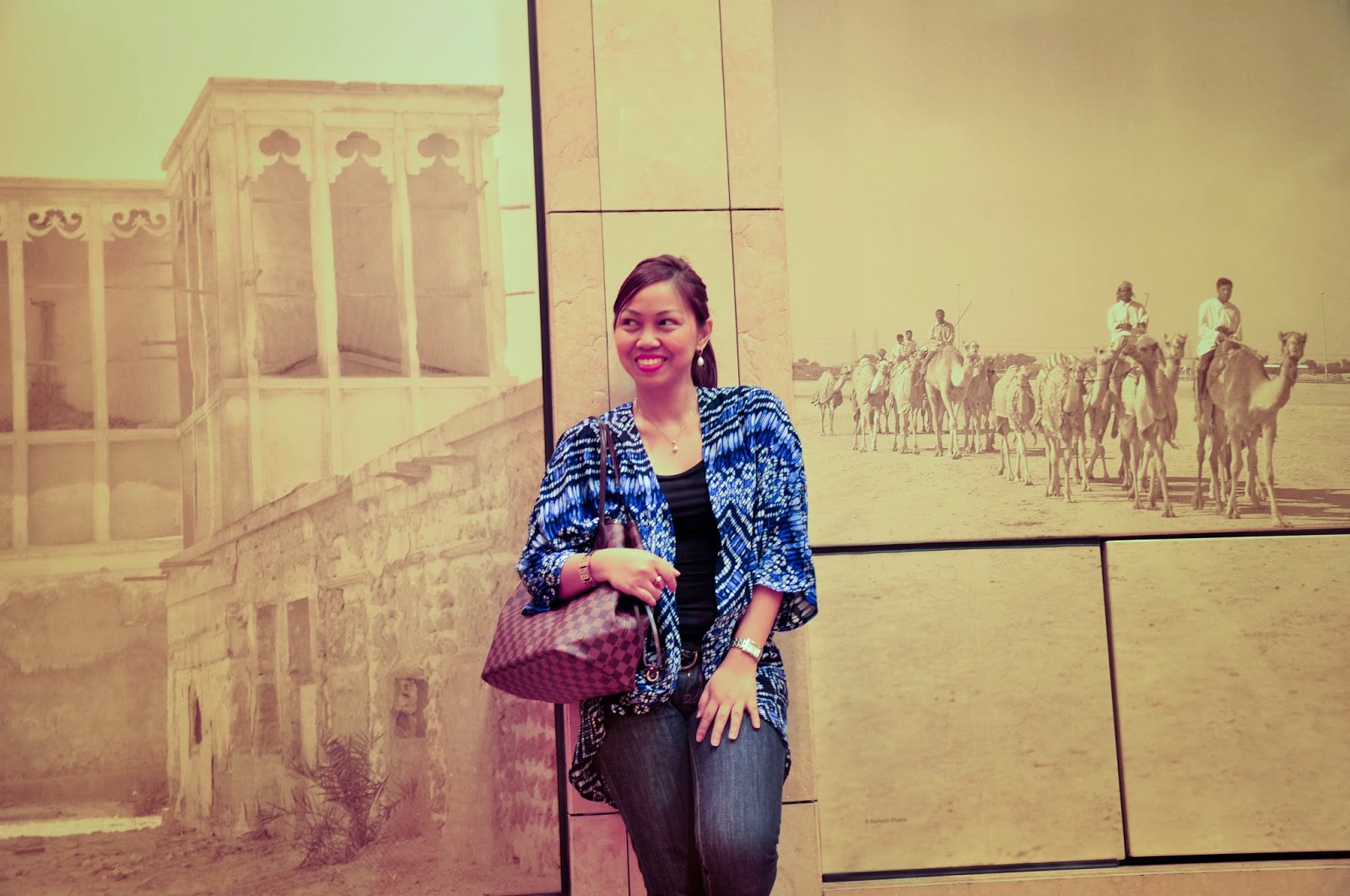 Tita Beth prepared a delicious home-made humba and I ate 3 big cups of rice! Haha! Afterall, it’s a long day for us I thought. Excuses! We went to visit her workplace – the Emirates Hotel Palace. I was just awed by its grandeur. It looks to me as the hotel in the “Sex and the City 2” but as I googled it says the movie didn’t use a hotel in Abu Dhabi itself. Inside the hotel was even a more beautiful sight. 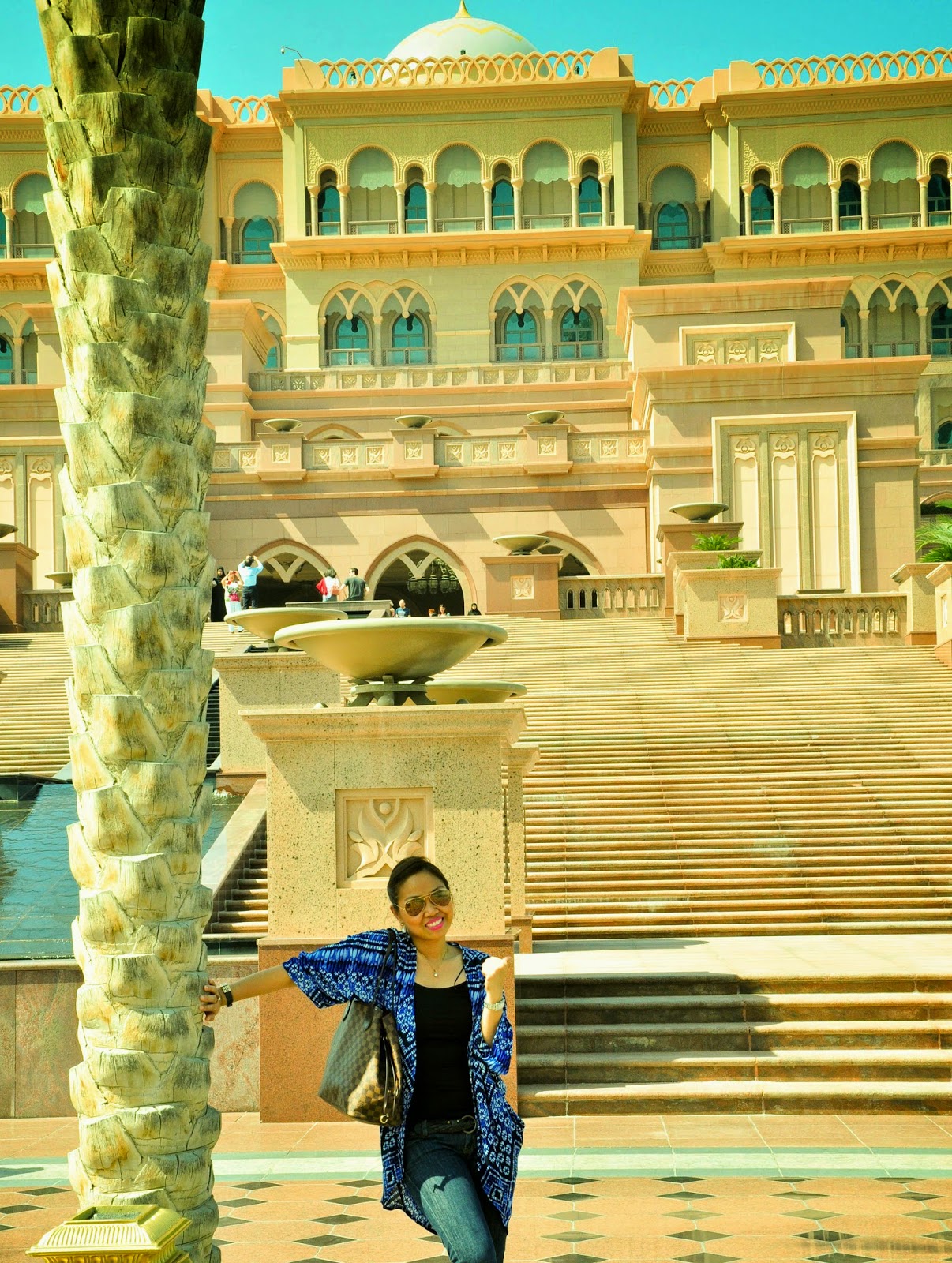 The interior is all gold to me. according to Wikipedia “The Emirates Palace is the second most expensive hotel ever built, only surpassed by Marina Bay Sands in Singapore.” They have the first Gold ATM that I saw which offers all kinds of gold in the world. All you have to do is drop in your bills for the equivalent amount of the gold that you want. Cool. 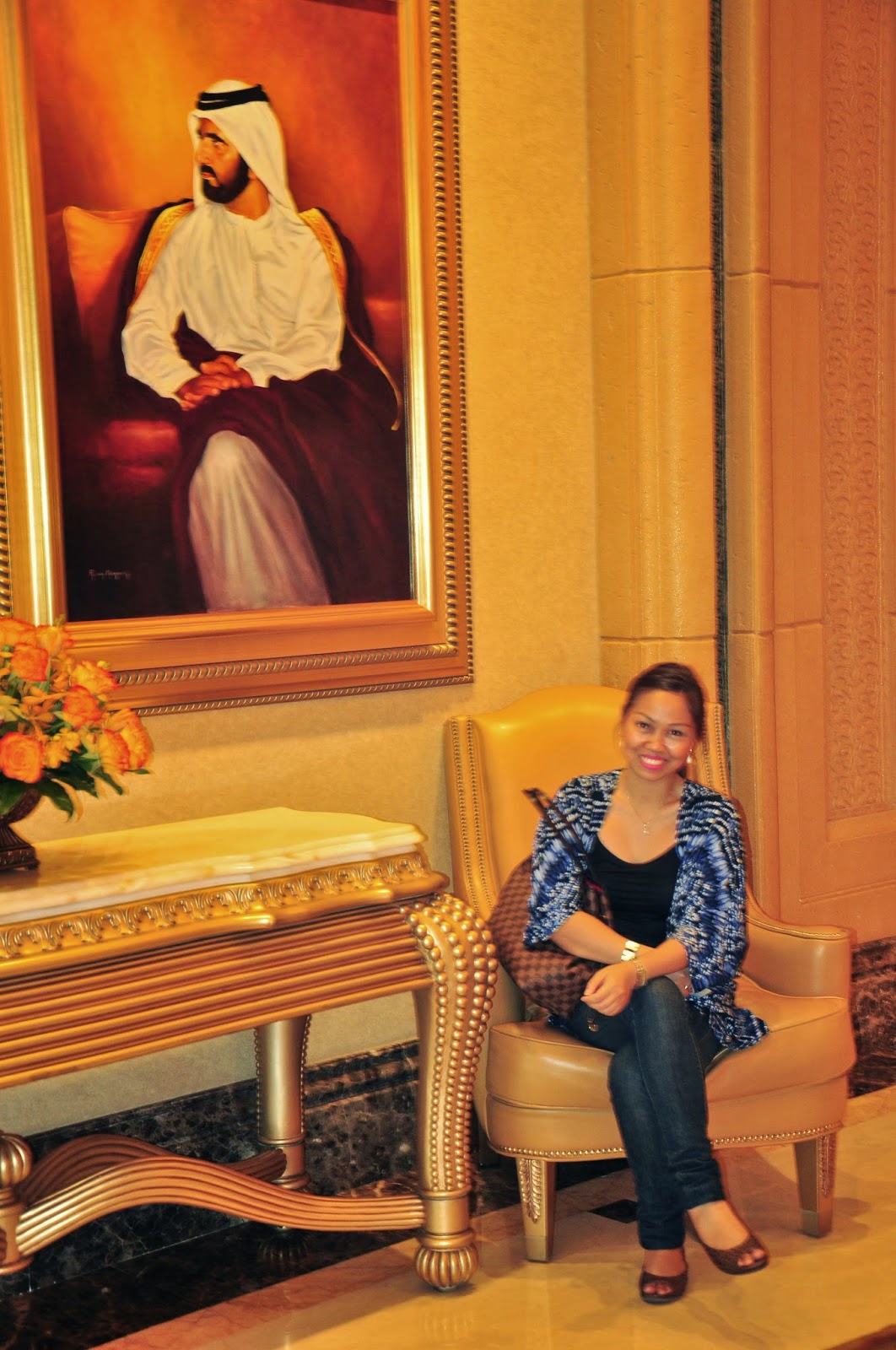 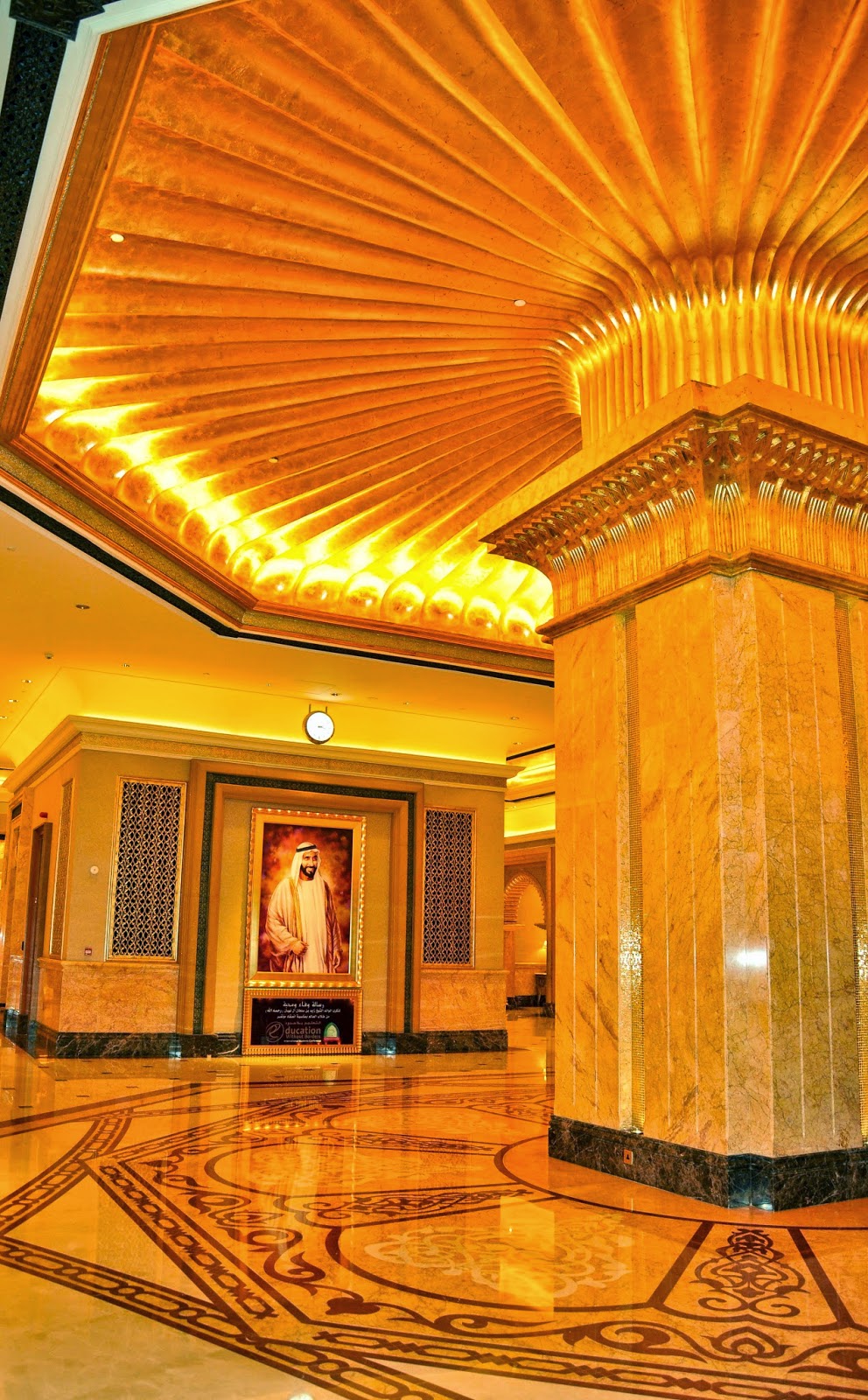 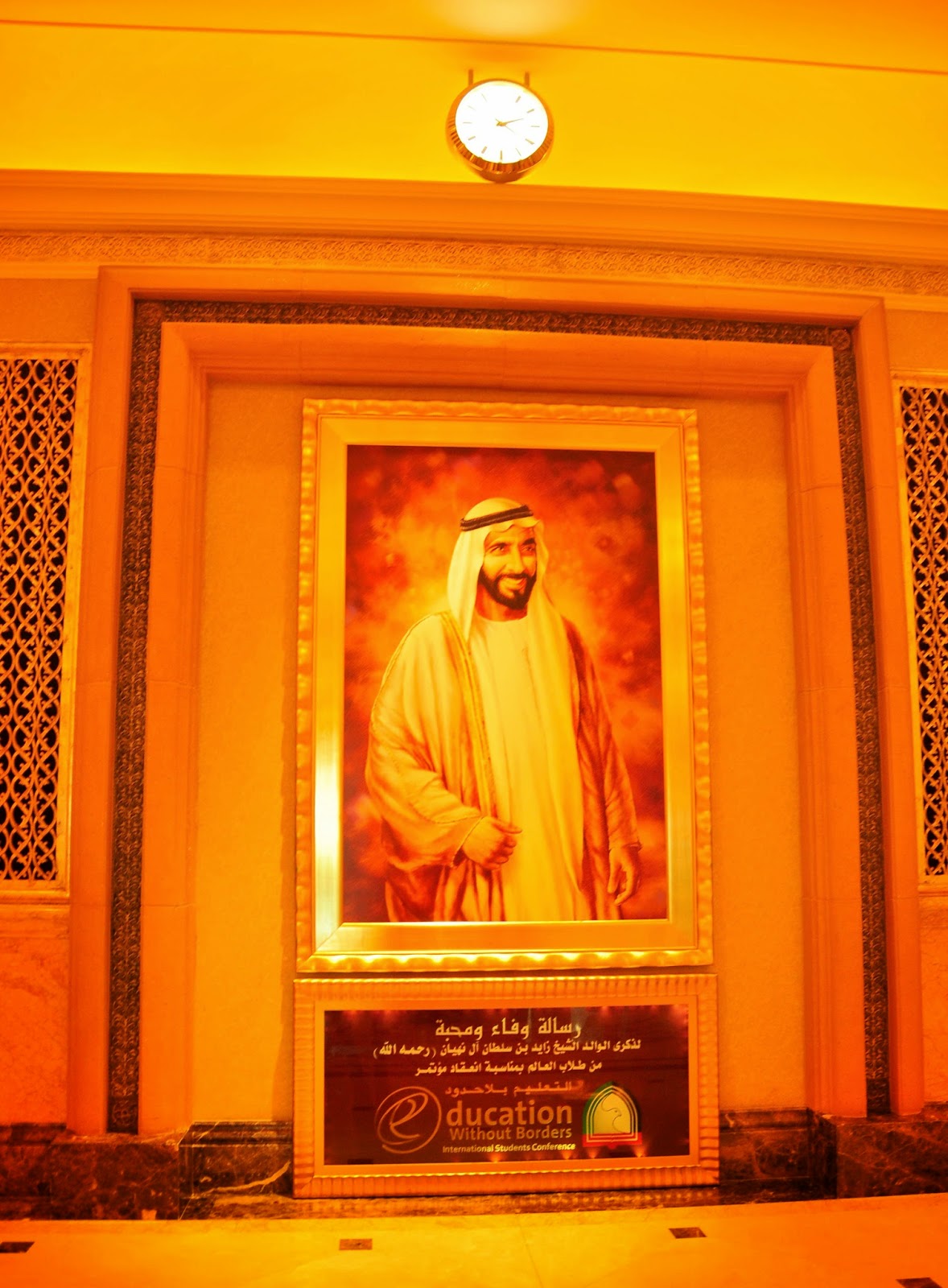 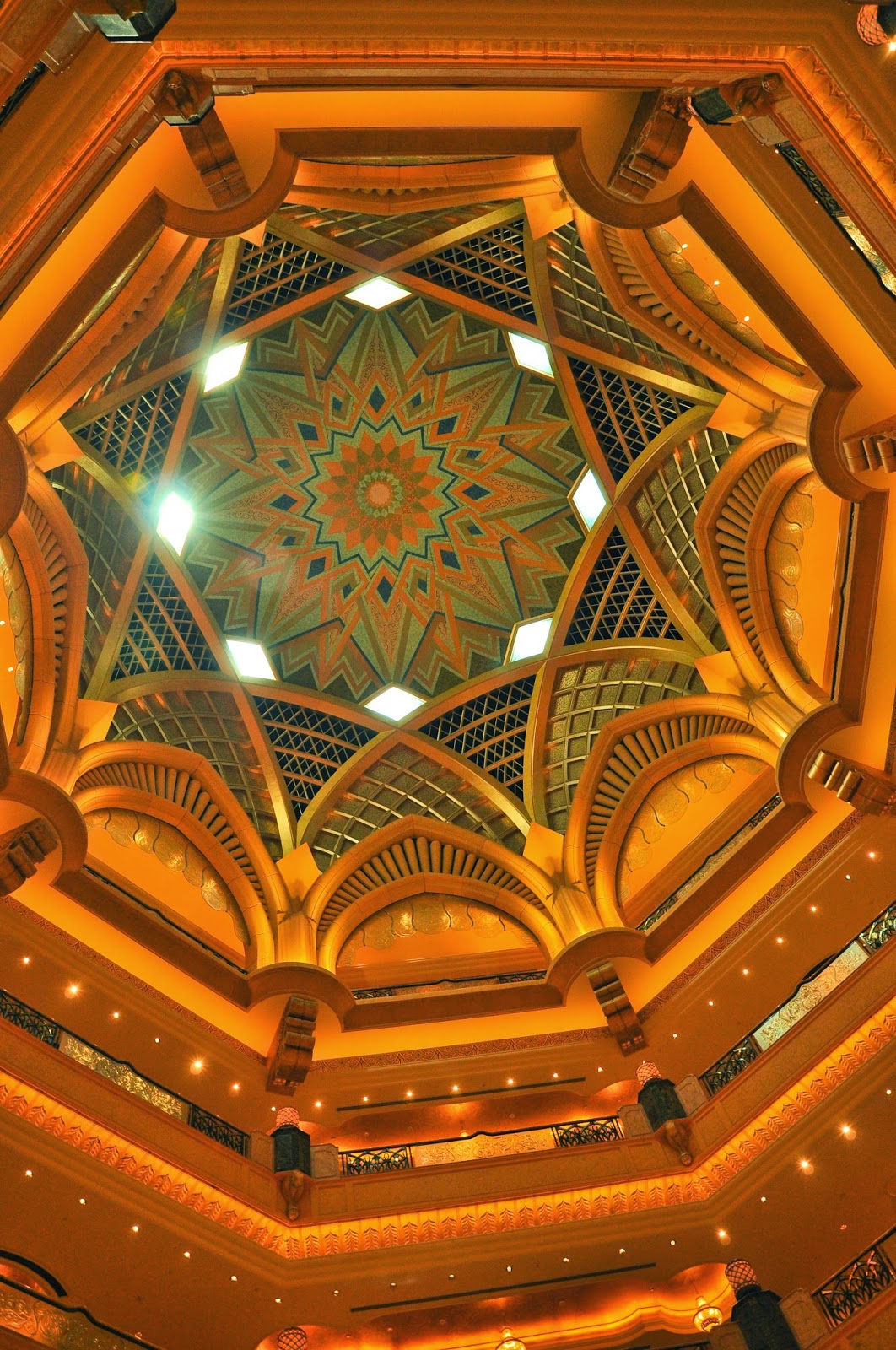 And because we were all hurrying up to reach the Safari ride in Dubai that afternoon we left after an hour and headed back. On the way, we dropped by the Sheikh Zayed Grand Mosque – the grandest one I have seen so far. 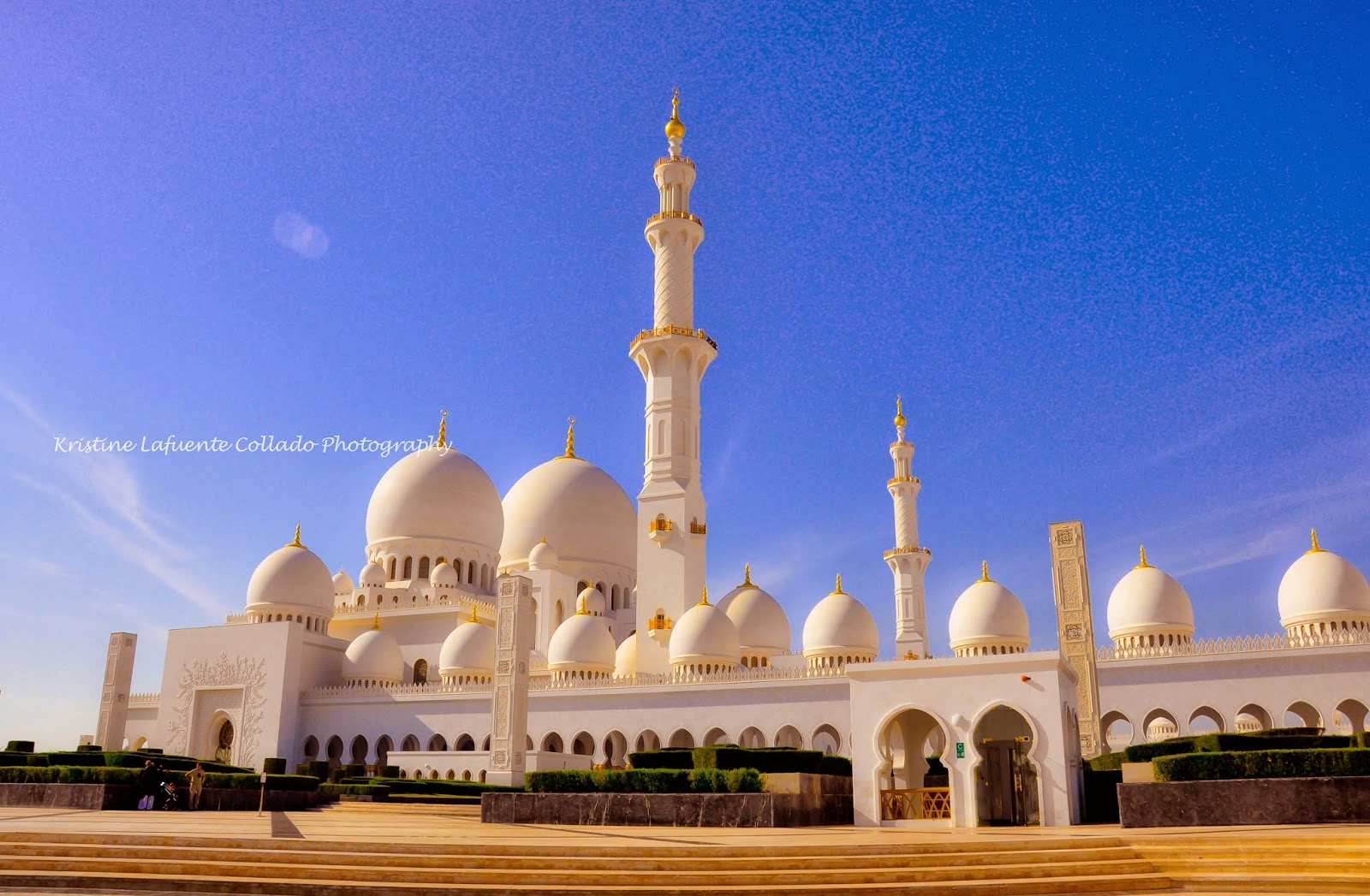 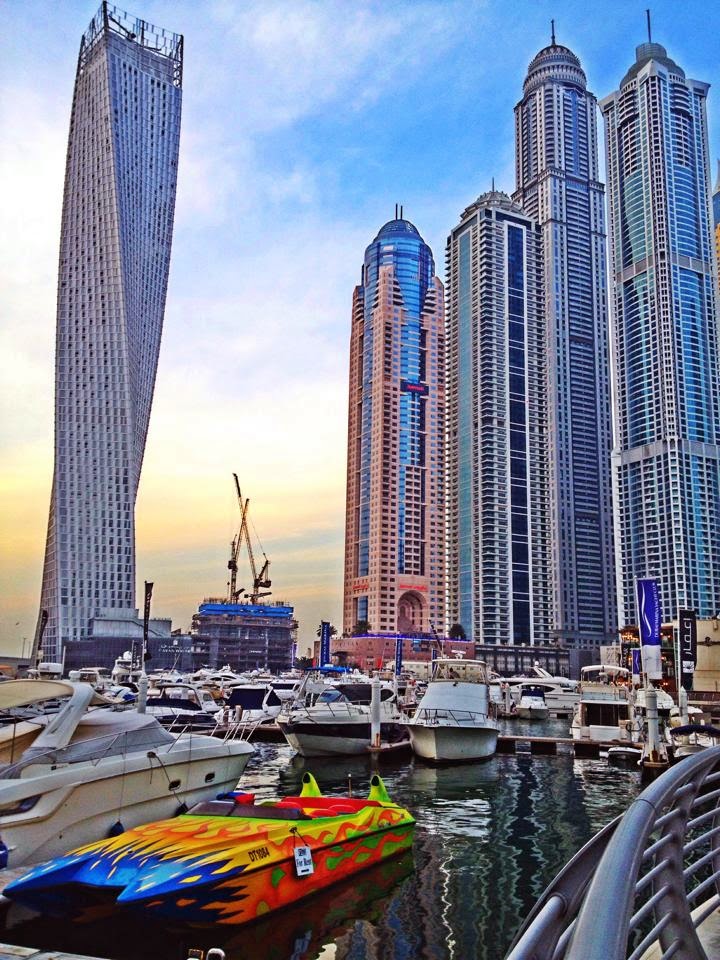 Back in Dubai we went to Marina Walk to take more pictures. In the evening, we went to Dubai Mall to witness the fountain show infront of the world’s tallest building – Burj Khalifa. Later on, I finally met a friend back in elementary days – Joy. We had dinner together over Turkish resto – oh I love hummus and pita! We had Joy's friend joining our catch-up dinner that night – he was an owner of a suite shop in Dubai Mall. Oh I can tell how much he admires my gorgeous friend. Well, she is indeed attractive with her beauty and wit – sure a really good combination to make any guy fall. I was happy to listen to her stories of bravery since the time we parted in grade school. I admire how she has become the strong-willed and successful lady that she is now. 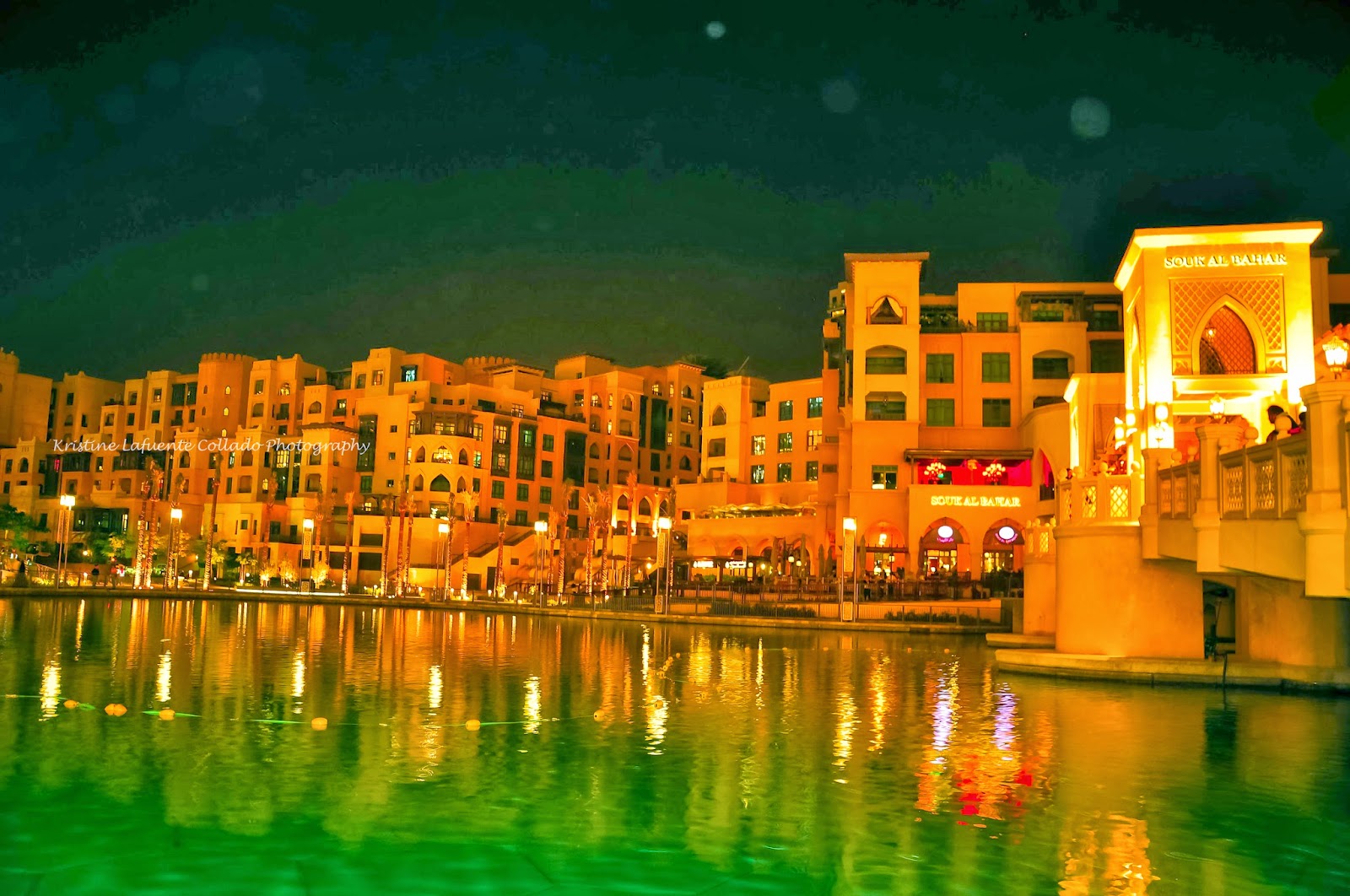 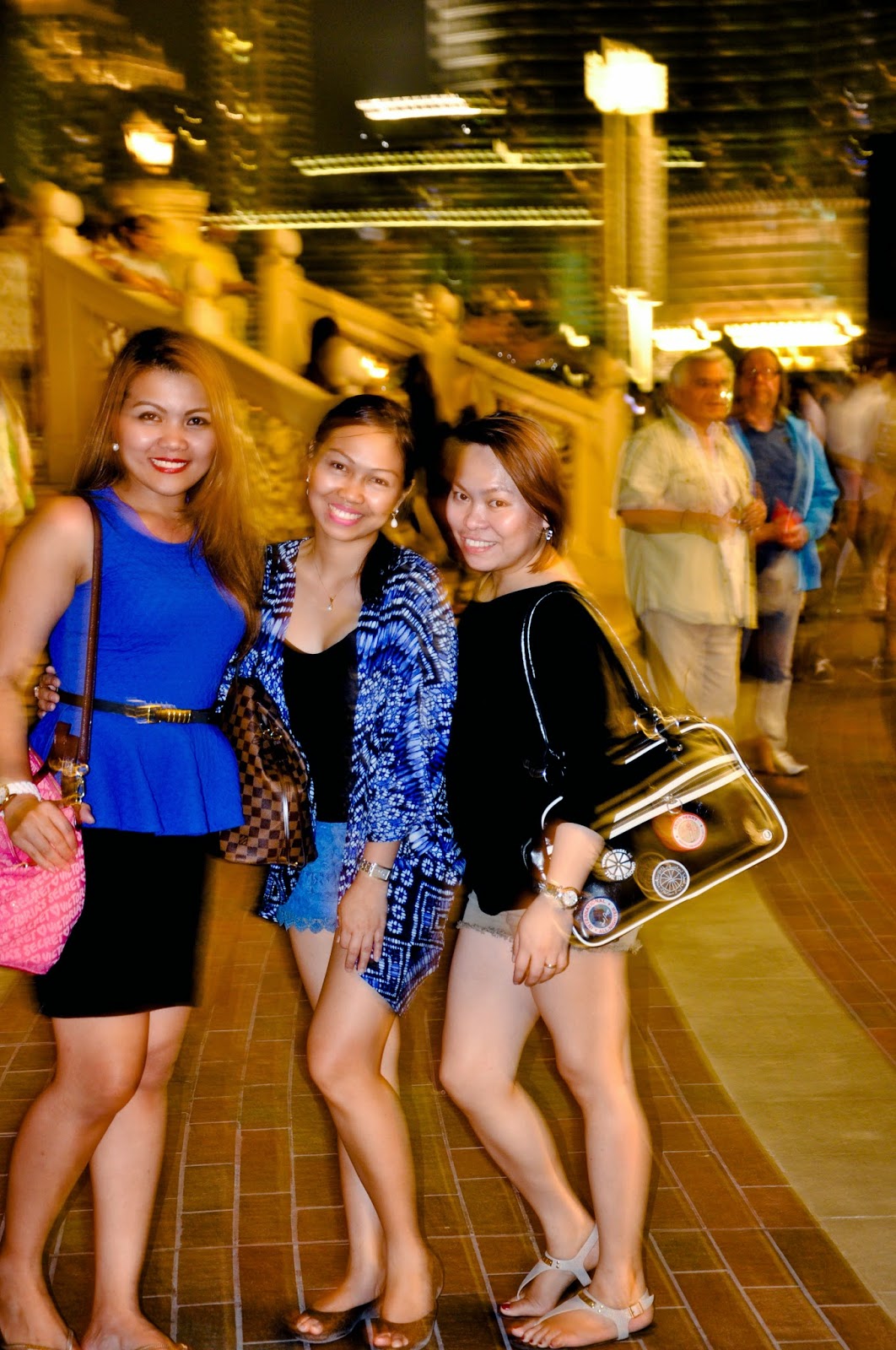 Moving on, she drove us to the Madinat Jumeirah– a place that really caught my heart – just fell in love with the ambiance, it was as if I were in an entirely different place – the kind where I would just hear about in movies. It would surely be romantic to have a dinner there along the river with the right amount of music to spice up the night. There were different clubs and restos all over the place. One of the must-go-to places I would say. 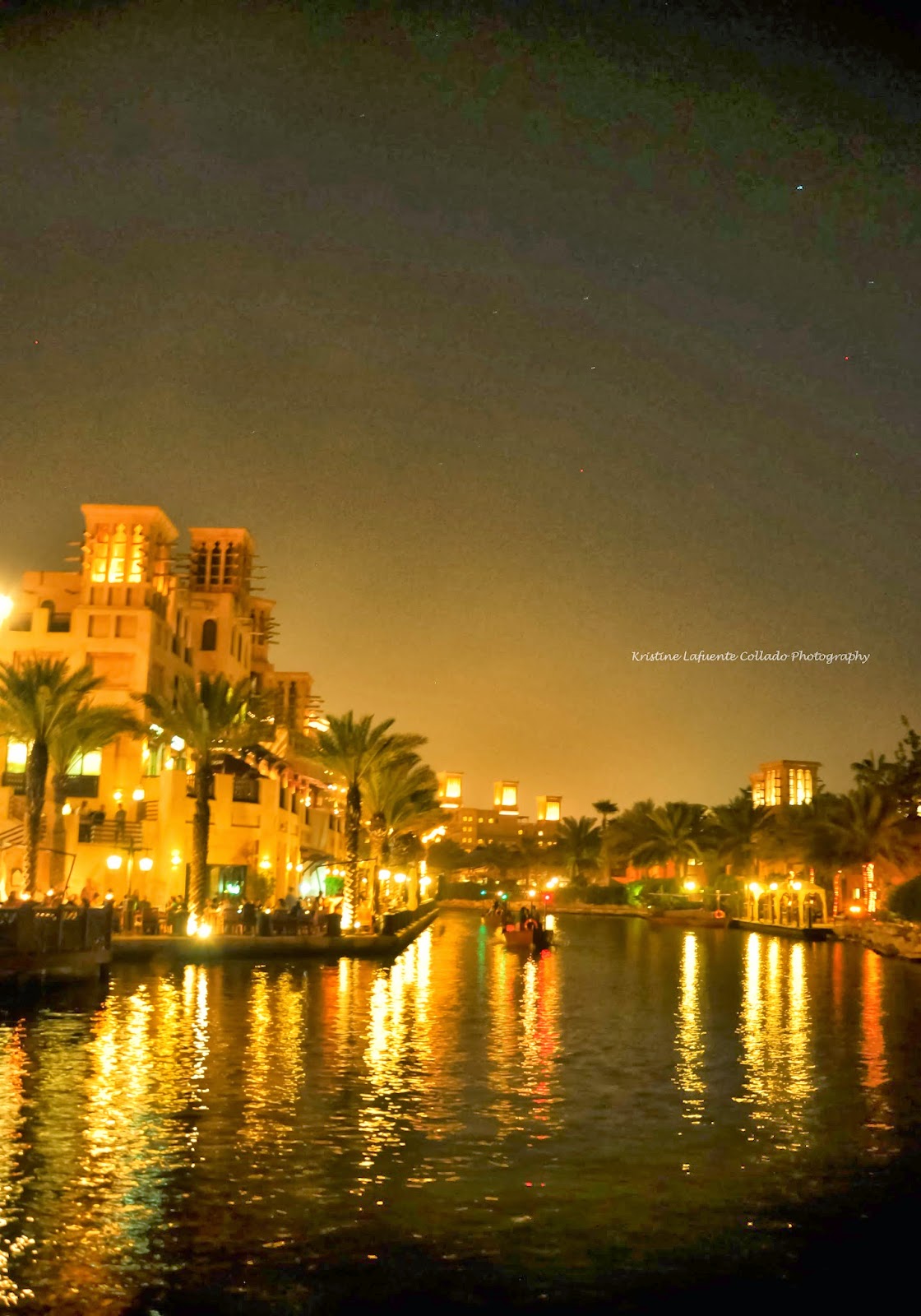 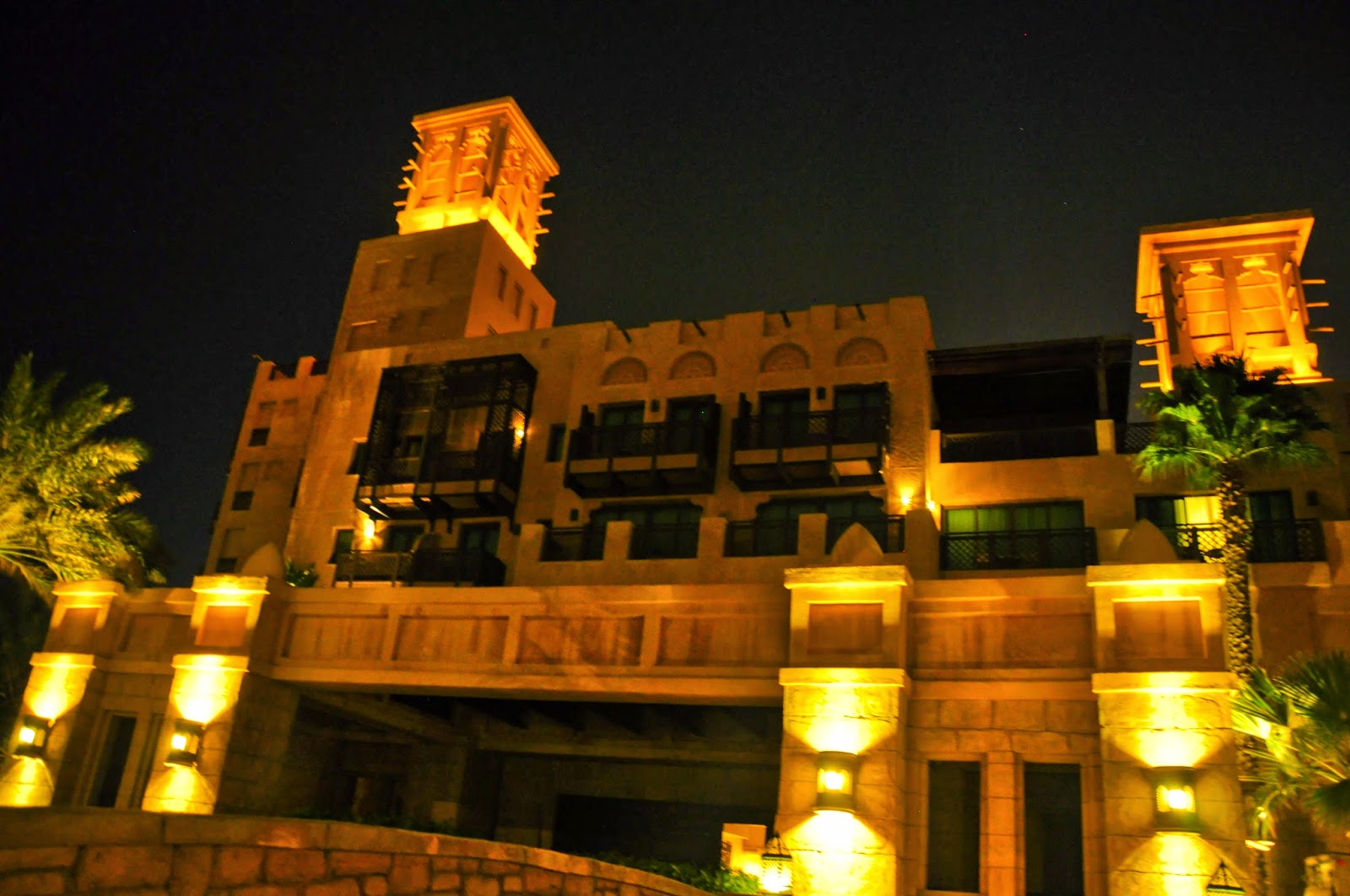 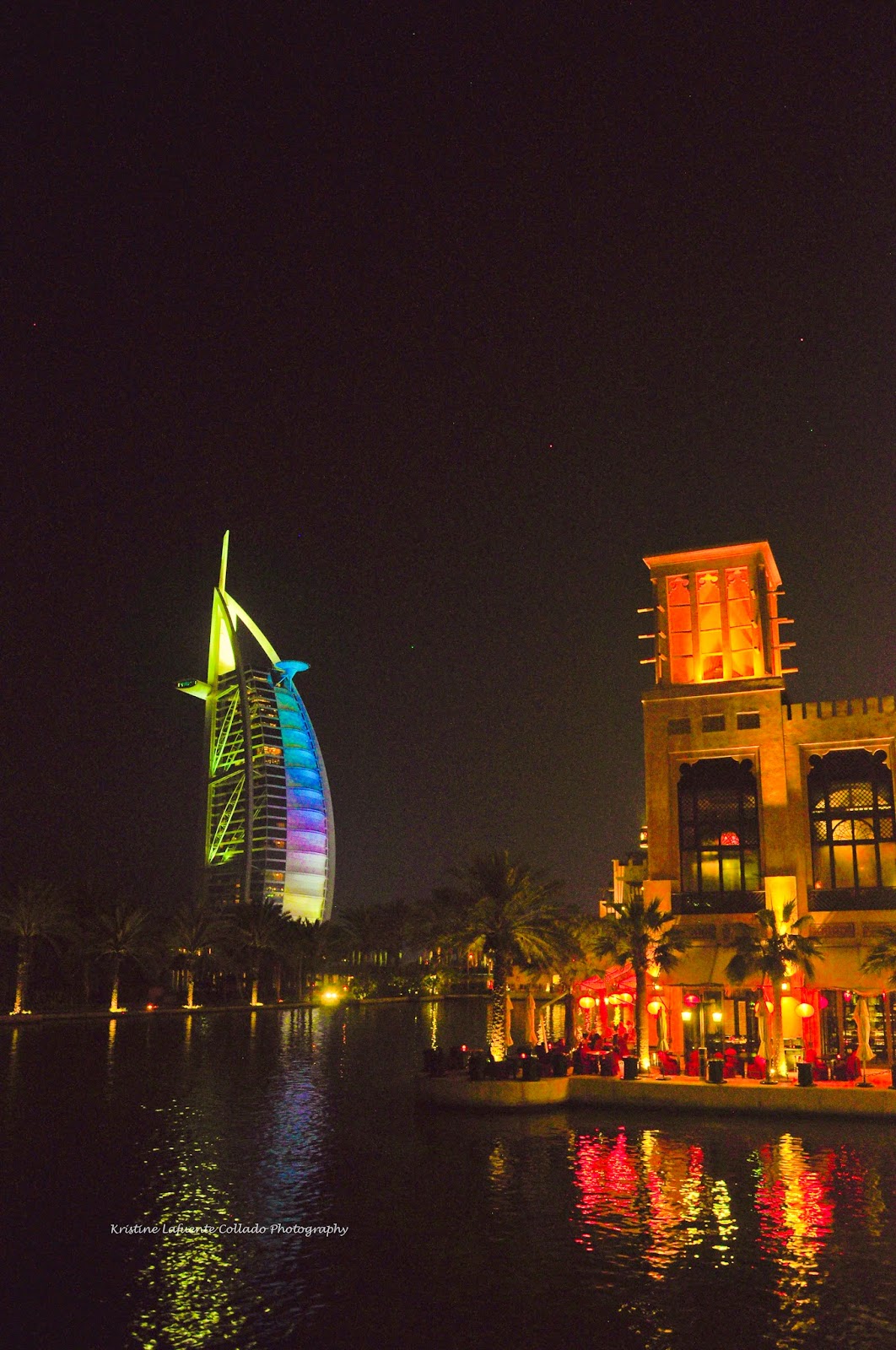 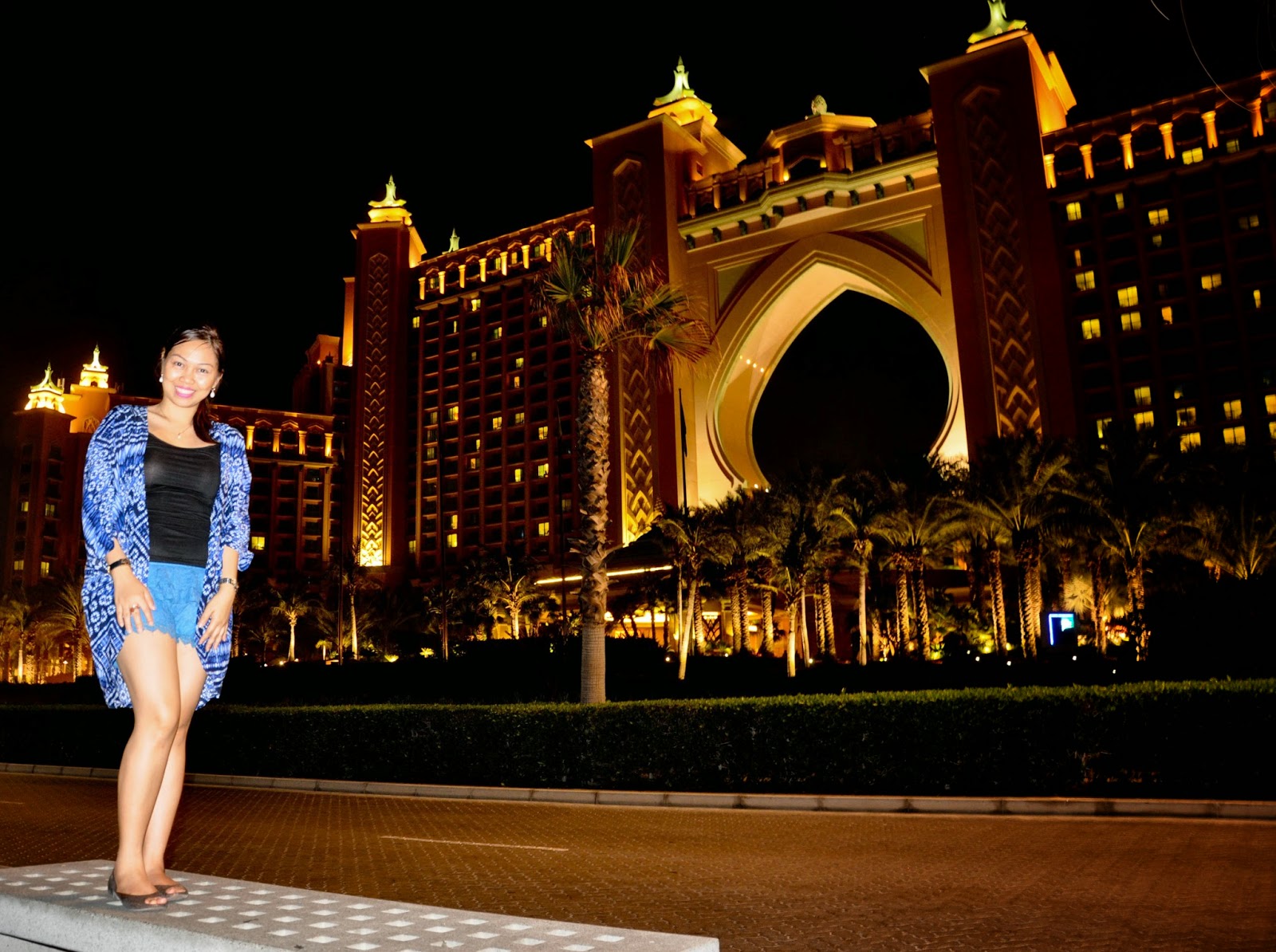 We also drove to the Atlantis for a break and finally we went to Barasti beach club – one of the places to be for everyone in Dubai. It would be a cozy place for partying all night long ey.

In the morning, we were still all in dilemma on whether we go for the Safari ride later that afternoon because I was flying out at 11 p.m.  But thank God we managed to get a good deal with a funny baba. Not only that, we were able to go and take pictures at Jumeirah beach for really a short 15-minute–time. We paid 100 bucks for the cab and we reached home just in time for the ultimate ride! We were not the only ones on that trip. So we went to fetch the other 3 passengers on the way. And that was really a funny moment looking back because they do not know how to speak English and they were all arguing about where to sit. Now I cannot allow my cousin to sit at the back – that will be crazy – I don’t want to risk. So out of her disgust she pulled the poor guy as if to push him out of the car and asked them to get onto another car as we would have to leave. Haha! I can really see her face turning red in anger and the horror on her fiance’s face. Haha! 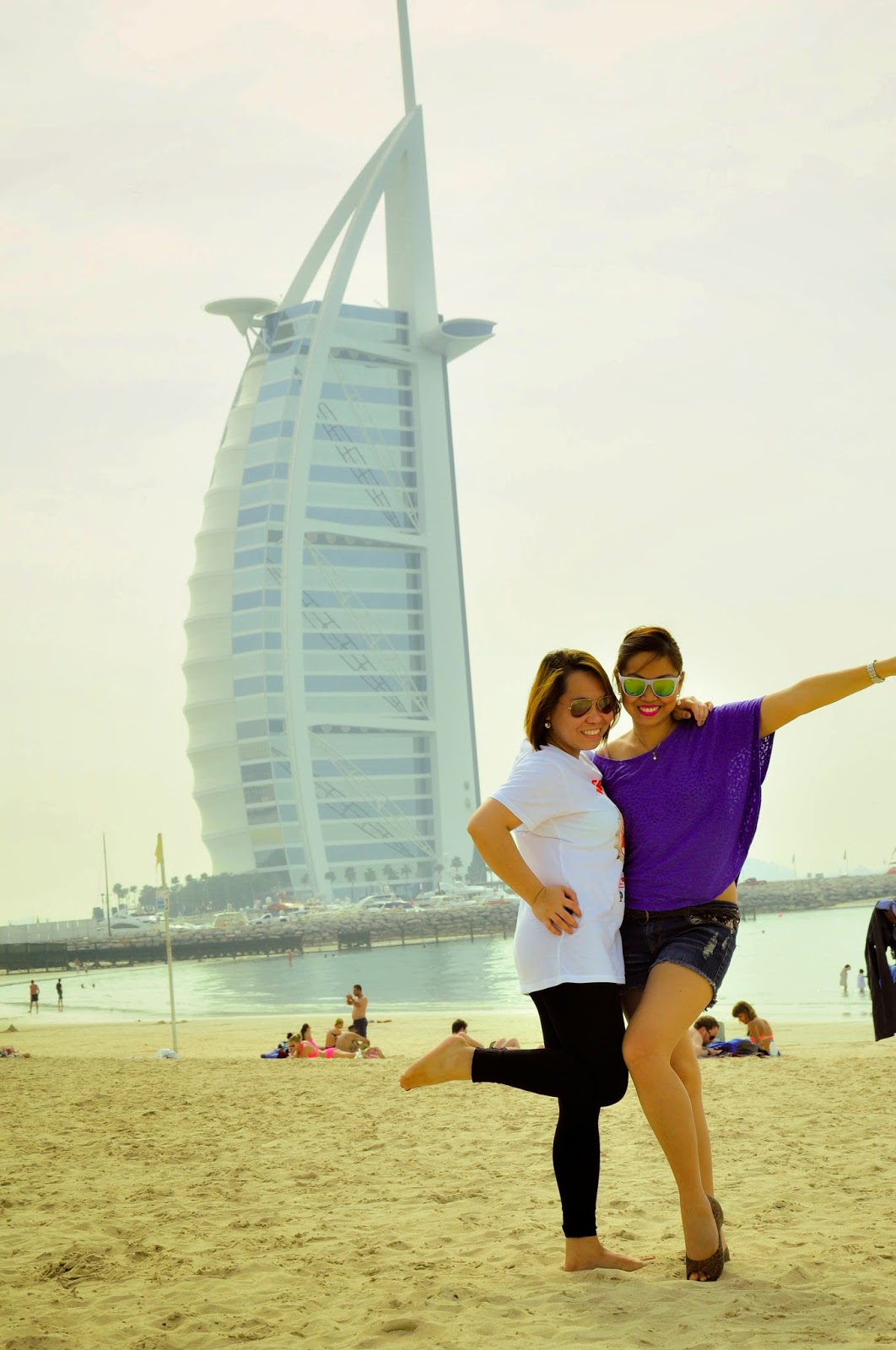 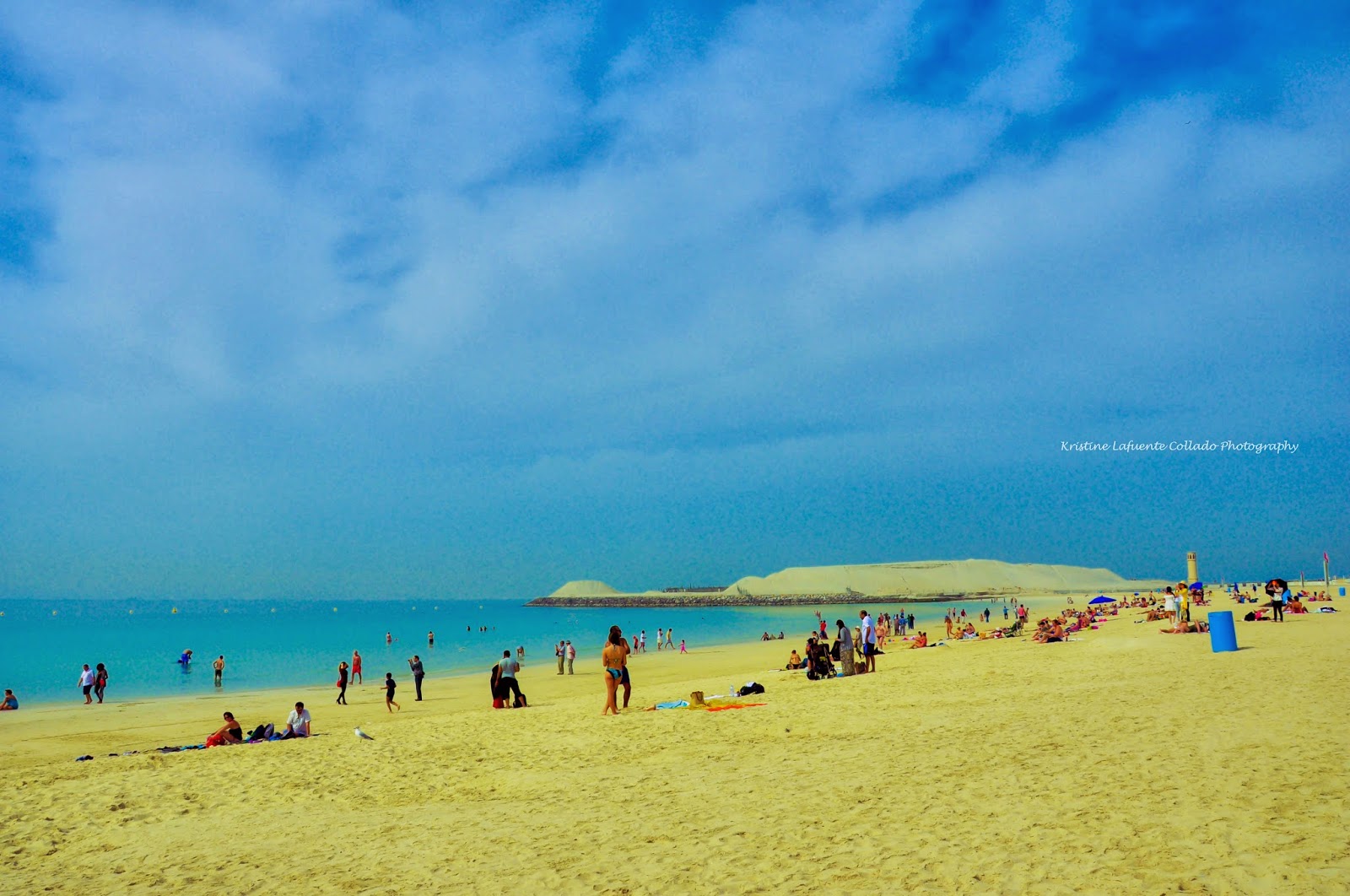 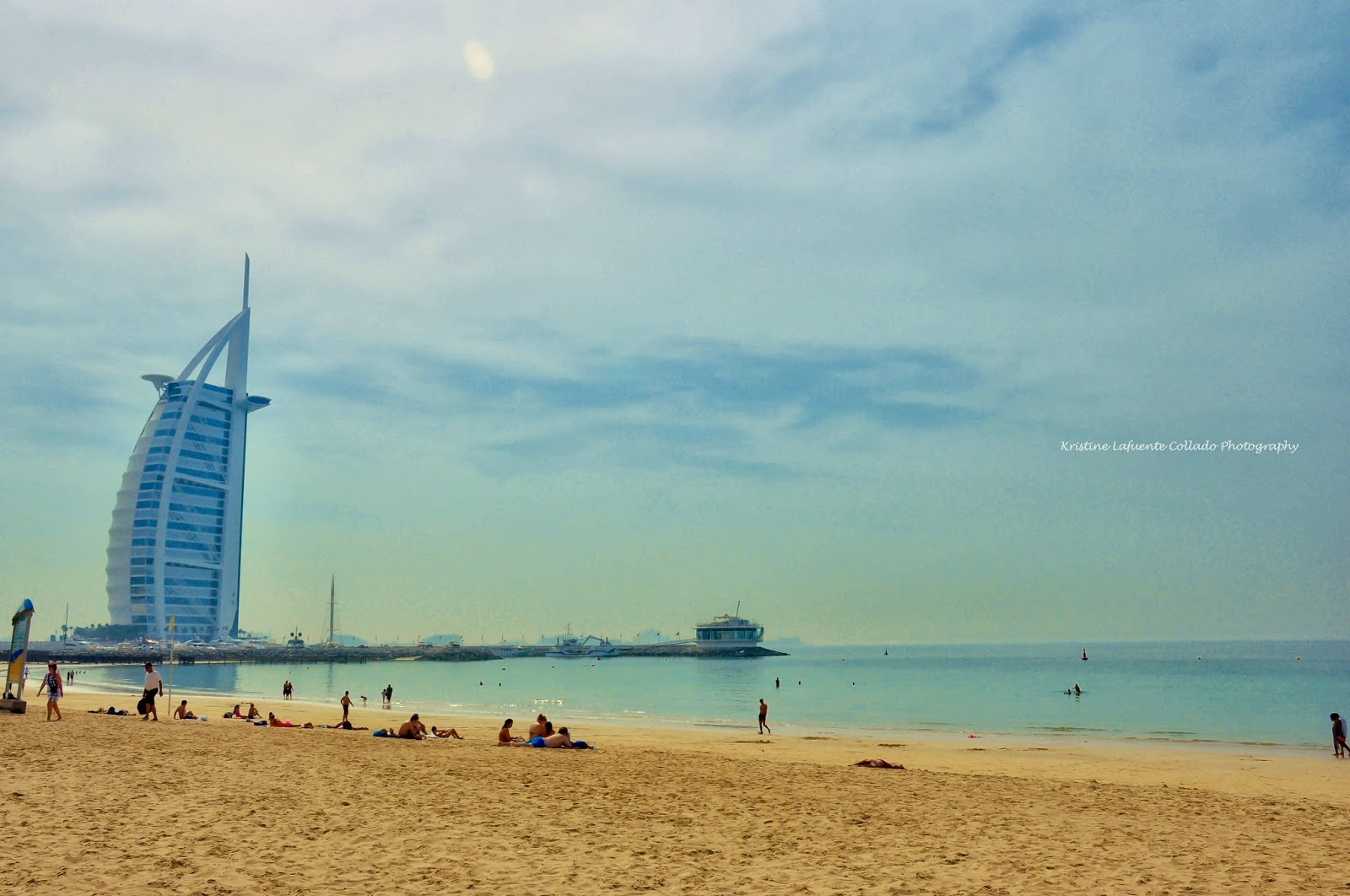 So yeah, maybe that wasn’t a good start but definitely the trip didn’t end bad – in fact we all enjoyed the ride. Baba was so cool. I learned that he isn’t from Dubai originally – he is from Pakistan. I think he found us rather quiet on the first few hours. So he drove us off to steep slopes to inject excitement. I love that place where we had our dinner. They have corners for Henna tattoo, the shisha smoke, the bar and the camel ride outside. Had a try of this Arabic meal – tasted just nice. Oh my adventure for food. Haha! And finally to cap the night was a show of a guy with the lights on his clothes kept spinning and the sexy lady for the Arabian belly dancing. Now that’s really very Arabian! Thank God we reached home earlier than we thought. I was able to take a bath just before heading to the airport. 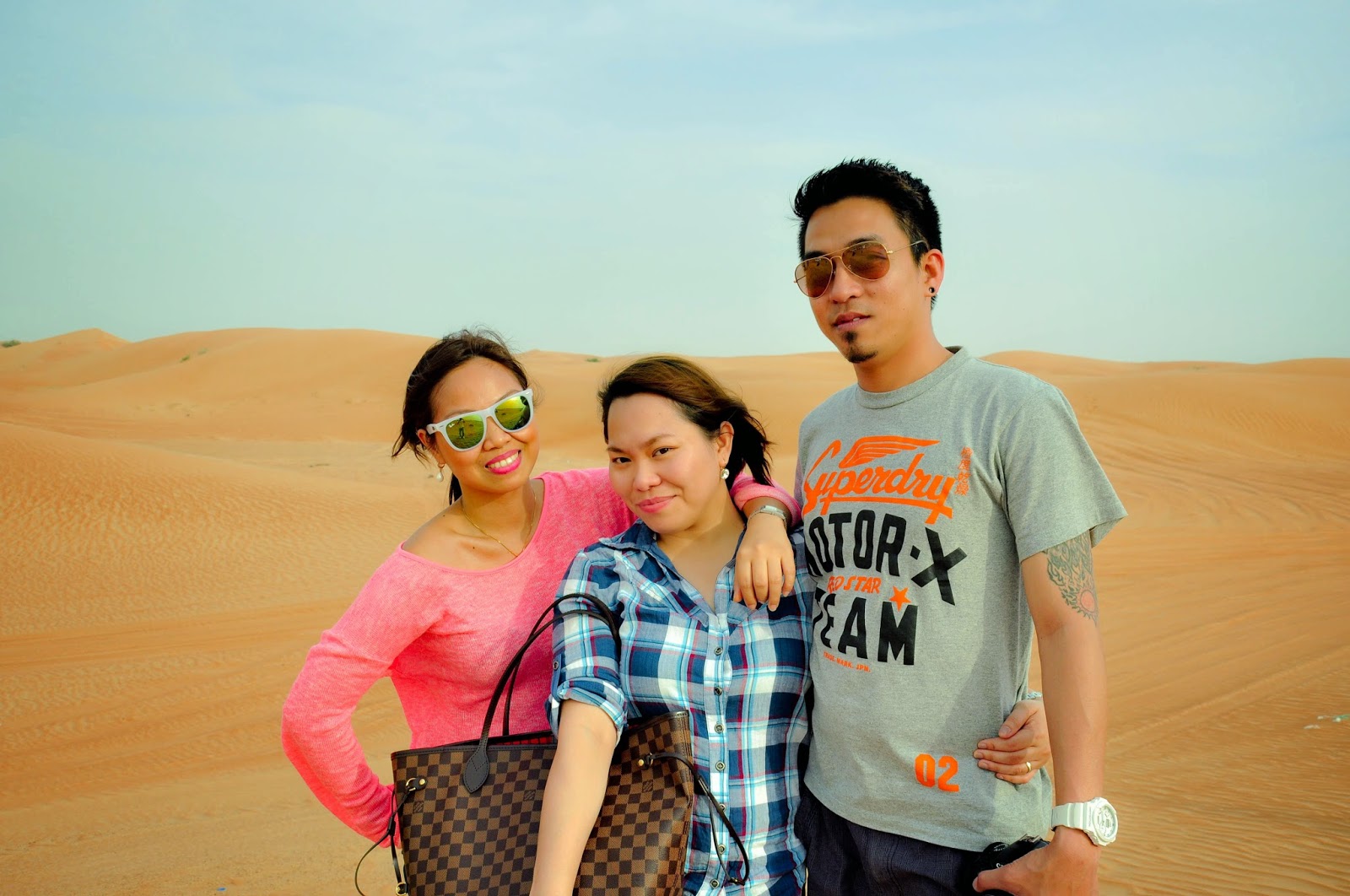 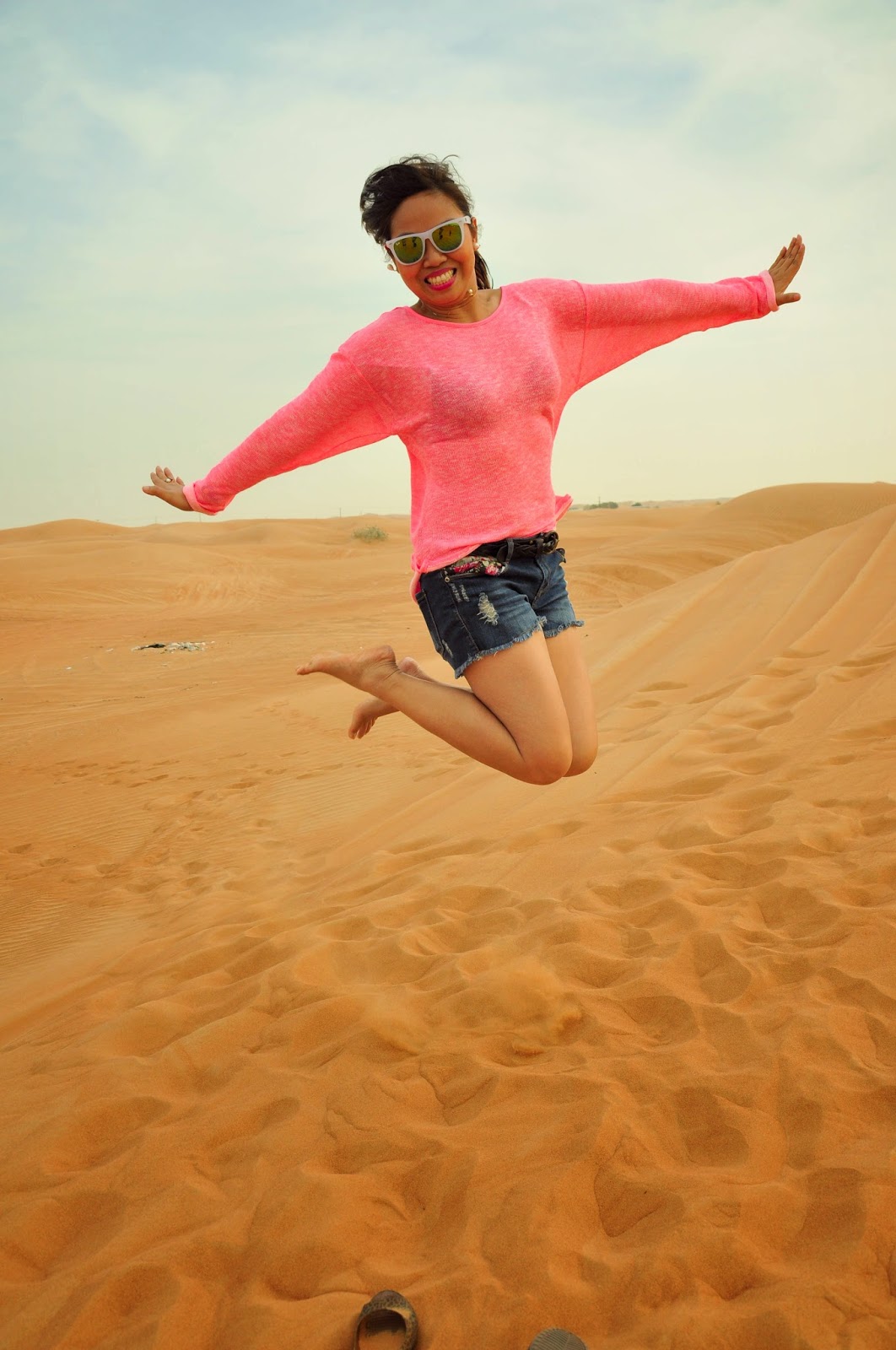 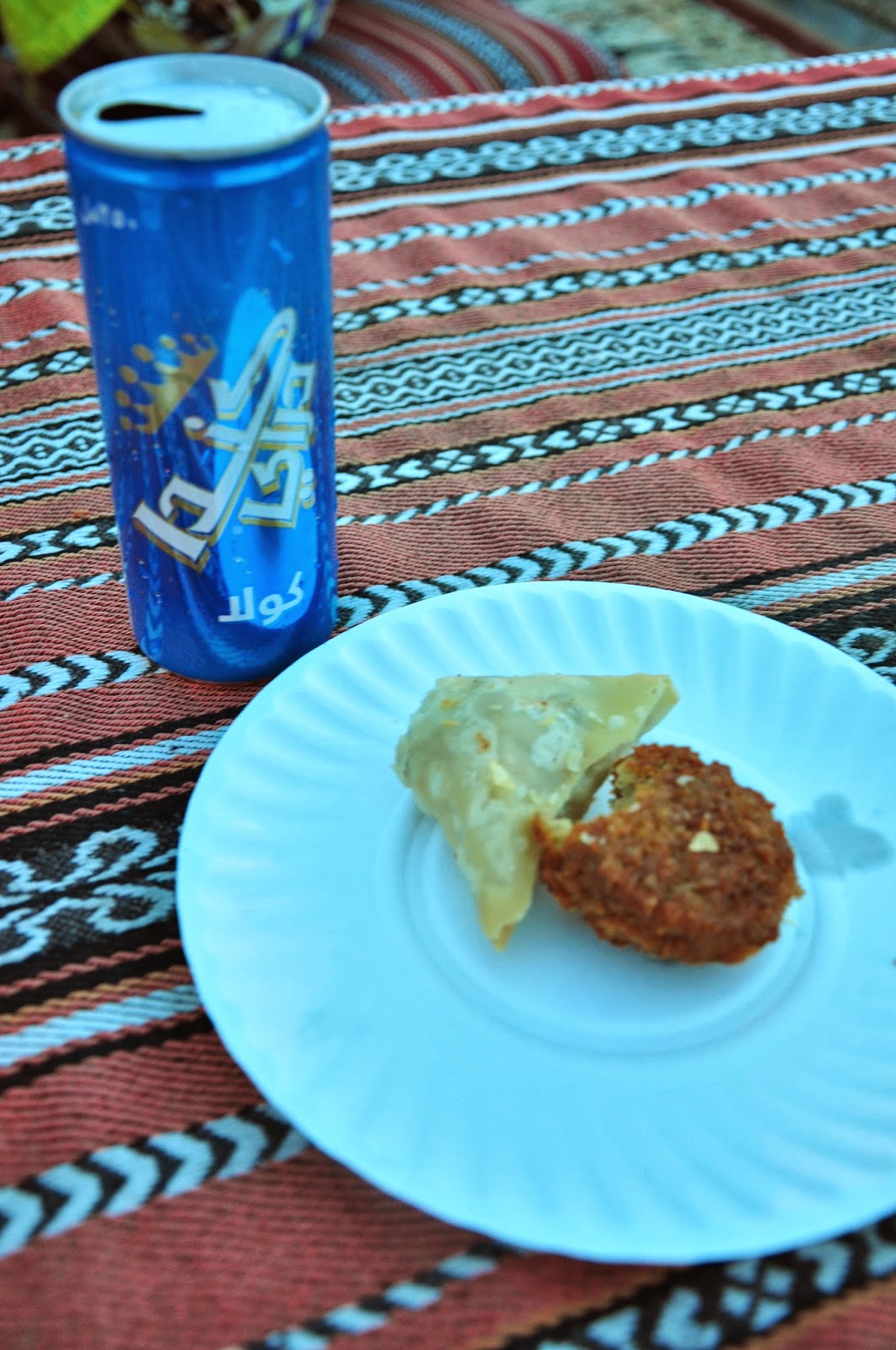 Altogether, I am blessed to have the really short Arabian experience. Thankfully, I still got a chance to experience the heat and being sun-kissed in the beautiful cities of Dubai and Abu Dhabi before getting all bundled up on my next residence. My taste and sight of my first 2 cities in the UAE opened my eyes to a whole new world. I was really amazed by the architectural designs, the life, the culture and all the man-made wonders the cities have to offer. Made me now wish of visiting my next destination in the Middle East. Thank you to my cousin Diane Avellano – I love you pit!; cousin-in-law Erickent G Monzon; and good friend Joy Xialeemar who all took their time off to show me around in just 2 days. Shukran! 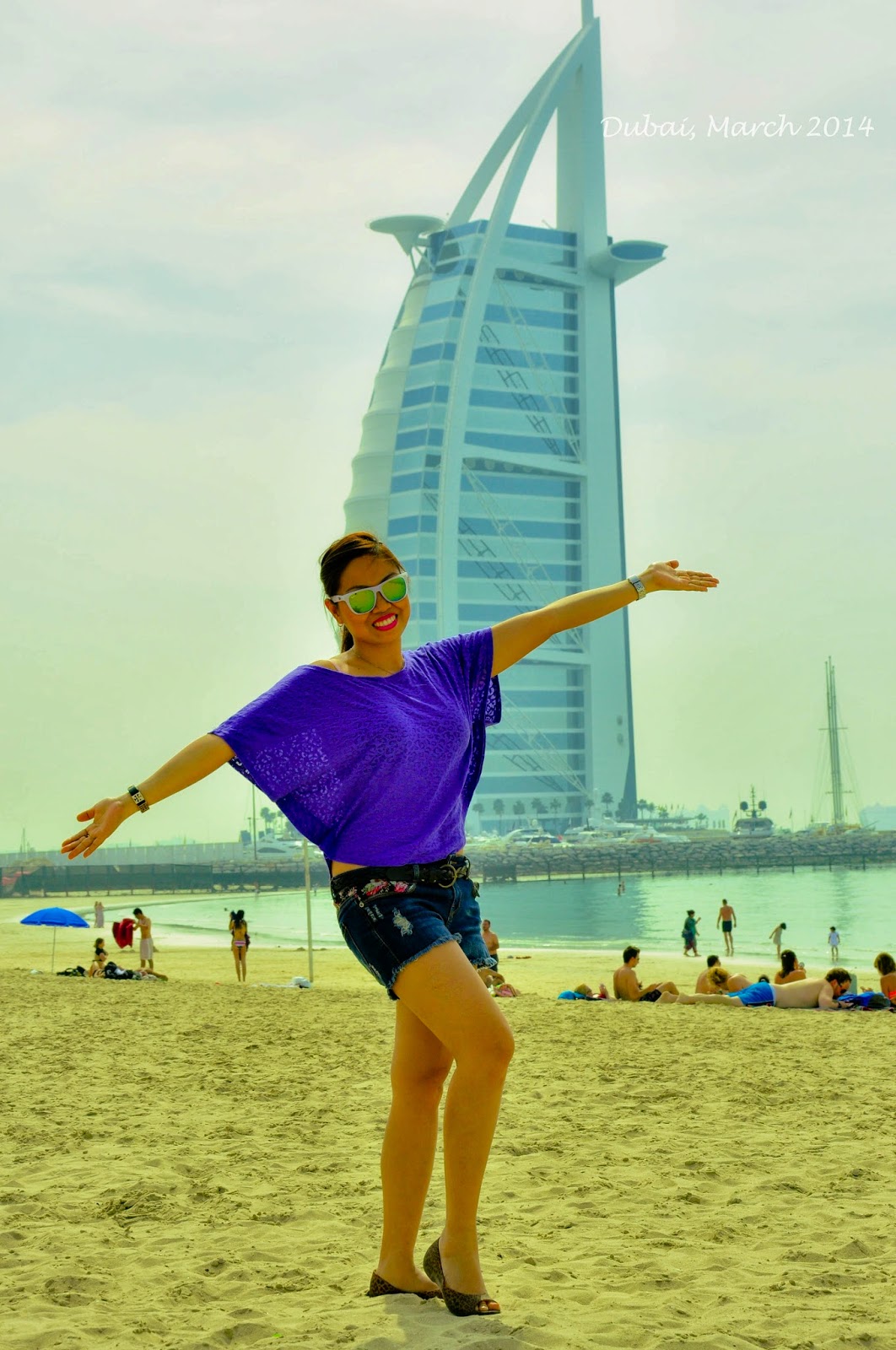