10 Most Memorable Moments in College #ThrowbackThursday 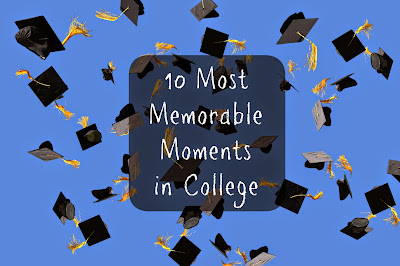 They say that High School life is the most fun part of your entire academic life. Well, I beg to differ. I would say that I enjoyed my College life the most.

The lessons I learned in College fundamentally helped me become who I am today. It certainly has filled in the most of part of my memory bank in school. Come, walk with me down the memory lane and relive those moments once again:

1.  The Issues of a Scholar. My life in college was pretty much about working hard to get myself in the honor roll and passing my freaking hard accounting subjects because I had to meet my minimum grade requirements to retain my scholarships. I relied mainly on my generous benefactors for my education. With only my mom taking care of our needs, I could not afford to lose my scholarships! And so I would always look out for the roll in that red wall in the college building. You can say I was a geek then. I was one of the nerds who would spend their free time in the library studying while some others were out there gallivanting. Modesty aside, I thank my scholarships for the discipline that I had developed from maintaining them. Because of the pressure, I strove to give my best everytime. Consequently, I ended up graduating Cum Laude. I was aiming for Magna but failed to meet the minimum mark in my fourth year because of Religion Studies (RS 105 - Marriage?!). O.K. maybe I was way too ambitious then. Haha! 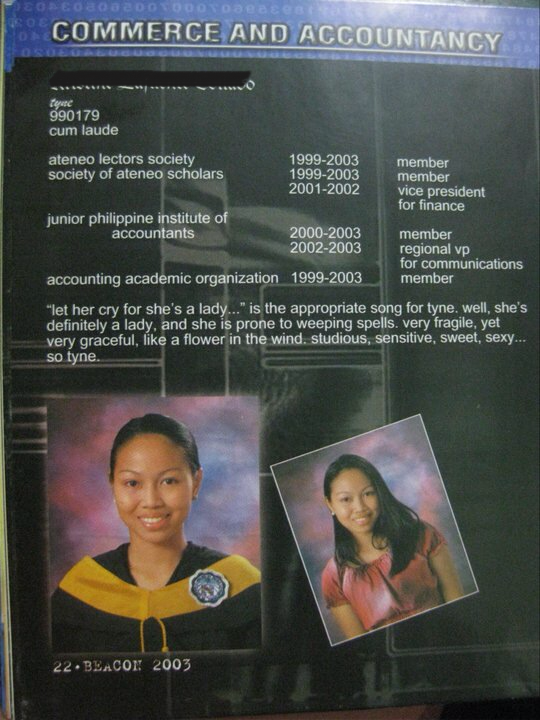 2.   The AB-Normal Block. When I learned that I am going to be in the "honors" class, I was ecstatic and intimidated at the same time. True enough, I was impressed to know that our class had the top graduates from the prestigious high schools in our town. I am not sure now but if I remember it right, each one of us had to introduce ourselves in the class mentioning our high school and our honors or awards. (Was it in RS or in the Scholarship gathering or something?) Luckily, I got myself in a block that majors in BS Accountancy and minors in AB Normality. Haha! Name the kind of student you can think of, our block had it! We got this block mate whom we suspected to be an alien because of his incredible wit. Another is a smart/metrosexual (correction: as evidenced by his snake print pants and silver body fit shirt worn on a normal class day)/clown guy who loved to stick out his tongue as if to seduce the girls while we were in the midst of a prayer in our RS class. One time, he got a keychain from Baguio that had the shape of a man's private part and held it in front of him, showing it to us. Only Chu can do that in a hilarious way! Others might think he was a pervert! Haha! We also had "The Man" who seemingly knew about everything. He would speak up for us whenever we had to haggle with the teacher and acted as the lawyer for the class. And, he did become a lawyer 5 years later. Then this same guy had an affair with someone in our block whom we called the "mother brain" because of her uncanny way of doing things that only she can do. :D 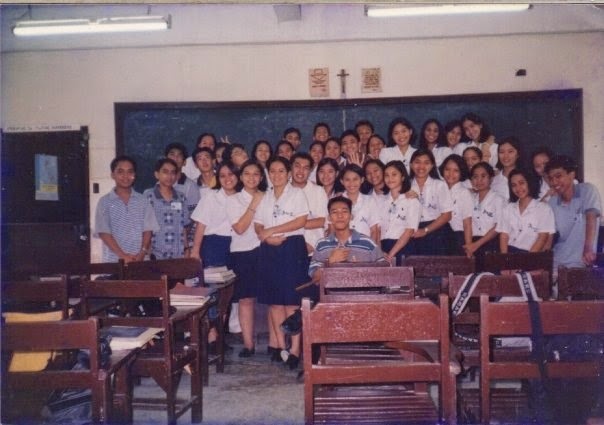 3.    How we rocked our Accounting Life. Everyone knows that accounting is one of the hardest courses to pass in Ateneo, or in any school for that matter. With the degree of difficulty (just think about that Kieso and Weygandt monster book - that’s already horrifying enough!) and the high ceiling mark that we had to painfully meet, accounting had stolen our youth from us! Those 4 precious years of our life that we could have spent doing some other worthwhile things, uhm, like clubbing? Whoa! Kidding aside, our block wasn’t that boring, really. We knew how to have fun in between serious studying. We did group studies with some “entertainment”. Haha! Lester’s group knew about it. My favorite groupmates (Carl, Ronald and Helen) would always end up working late at Ronald's place. Not to forget Cate’s house was always open to us as she would invite us over for her annual birthday celebration. She was one of the rich kids in the class along with Jehan who always had the latest gadgets that time. Then there was the La Vina staycation, where we spent days in the hotel finishing our JPIA (Junior Philippines Institute of Accountants) memorabilia booklet. For most part of those days, we didn’t really do the work. We just stayed there killing time, enjoying in the hotel.

4.    My Wingless Angels. When I think of college, I would remember 2 people the most: Helen and my then boyfriend. (Oh, am I hearing your "aaahhh..." now? Haha!) College life would not have been that bearable for me without them. Helen, whom I call Iw-iw, has been with me through everything! She was my study buddy and confidante. We had this silent agreement to be there for each other, no matter what. When I would ask her if she studied for an exam, she would say "not really" so I won't have to feel worried as we would be in the same situation. And if either of us studied well, we both know the drill. Haha! I can never forget those times, when I had nothing, and she would share her allowance with me so we can have our merienda in the afternoon.

My then boyfriend, on the other hand, had been my inspiration (and distraction? Haha!) all throughout. I think that people will forever associate me with him when they remember our college days. Well, he was my first love. (O.K. I am revisiting the happy good memories here. Haha!) Funny but we never studied together. Perhaps, he couldn't stand being around with me whenever we were pressured over an exam because I was so instense. But I am sincerely grateful for all that he's done for me, especially when I needed help and he took care of my mom in the hospital for me, while I studied for our exam the following day. He was that supportive then. And the rest is history. : )

5.  My Most Embarrassing Moment, EVERRR!!! I recall I was sick that time when we had the exam in our cost accounting subject. I don't know but for some reason just when I got the test paper, my mind went blank. I panicked and started to hyperventilate. Then the unthinkable happened. I cried during the exam!!! It was so embarrassing! What was i thinking then?! At that very moment, I really had wished that the ground had opened and just devoured me. I felt that bad!

6.  The Unforgettable Mentors. I will never forget my first lessons on debits and credits from the well-known accounting teacher, Ma'am P. She had her way of making things sound easier than understood. I can imagine her smile in between her lectures while our brows meet as we figure out what she was talking about.

And who would forget my most favorite professor in college, Sir E? His classes were unforgettable because of the real life lessons that we learned in the classroom which we would later bring with us as we immersed ourselves in the real world. He wasn't just a teacher. He was more of a transformer for me, encouraging a positive paradigm shift on us. He made such a remarkable impact on me that I still remember the stories from the Vitaminds booklet. I also shared “my family story” first in his class.

Then there's the JI fever! Haha! The heart-throb, Aga Muhlach look-alike! He was famous for the "Worst-Case scenario" line and his erratic mood swings. I can't forget the time that he walked out on us. Oh, the shock on our faces! Haha!

And now, last but [not] the beast, sorry, I meant [not] the least, tell me who does not know this professor who terrorized all his students in the most unlikely subject?! Clue: S.J. Eepss.. I used to think before that RS was supposed to teach us to love more. His teaching methods pushed some of his students to resent him instead. Haha! Case in point: the famous professor mentioned above who was at the top of his class but did not graduate because of his RS grade. And he was not the only victim. I got a few other equally smart block mates who shared the same fate. O.K. Enough. Past is past. Haha!

7.  The Storm before the Calm Graduation. We were at the last lapse of the run towards the finish line when majority of us had difficulty meeting the ceiling grade in Accounting 227: Special Topics in Accounting. That’s when almost 2/3 of the pilot class didn't make it to the graduation. It created such a huge strife that was about to turn into an armed uprising with the parents’ participation. Now as I recall that moment, I just could not help but laugh at our desperation. 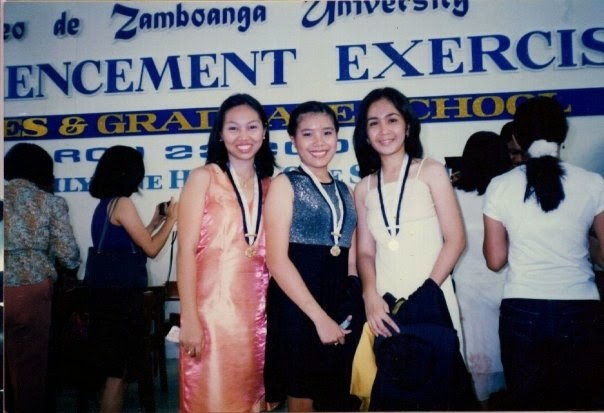 8.   What’s the Buzz? Tell me what’s happening. I was at my favorite spot right beside the stairs, studying that afternoon when Dee reluctantly confronted me about a secret that they had to keep from me while I was recovering from the pox. There was chaos after that conversation. Mad about the “gossip” that circulated, the girls and I went to the boy’s dorm as if we’re up for a fight. It ended with the girls and guys discussing about a personal issue that should have been settled between the parties directly concerned. Looking back now, I could just laugh because it was the biggest imaginative joke I had ever heard then. Yes, now, I am taking this chance to clarify on the issue! LOL.

9.  My Sweet Roomies. Not minding the risk of getting infected by the pox, my roommates would still sneak outside my room and pass me my meds or anything I need through the small space in my door. That was the sweetest! I was grateful to have had spent 6 months with Cate, Lynette and Helen who had to put up with my abnormal behavior sometimes. Haha! We love eating quek quek for afternoon snack.

I recall our room’s window was facing the review school. We usually leave it open because it gets warm in the afternoon. One time, after the girls and I had just awaken from a nap, Cate stood up and I noticed that her robe was opened and her chest was exposed. We all panicked because some guys were looking through our window. I can’t forget the horror on Cate’s face. That was so funny! Speaking of horror, we also had one story inside our room. While all the four of us were in bed and about to sleep, we suddenly heard someone turn on the faucet. It cannot be anyone of us! We were so sure of that! I can imagine how Lynette must have felt then as she was the nearest one to the faucet. 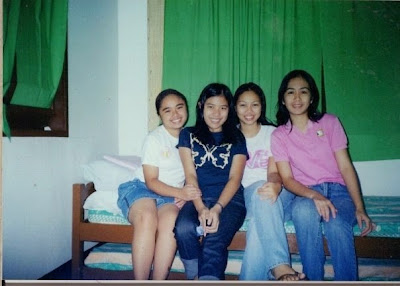 10. The Dreaded Pox! Of all the times in my life when I would agree to get the inevitable pox, it hit me just 2 months before my CPA board examination. Perfect timing! Que Horror! I was isolated in a room in our dorm for 2 weeks. I understood then that I CANNOT infect the other girls who were also preparing for the board exam. Still, I felt like I was a lady beast who had to be locked up in a creepy dungeon.  I had to stay in a room that has not been occupied for a long time. Who knows why?! So imagine, every night felt like an adventure for me. The lights had to be off at 10 p.m. and I was always on the lookout for any paranormal activity. Geez!