I Found True Love in a Hopeful Place

About a month ago, I was in a state of immense emptiness. Life seemed to be nothing more than just a repetitive series of meaningless events. I felt lost.

Then, thankfully through a sharing by a friend in our community, I came to know about the Missionaries of the Poor. My curiosity and desire to experience something extraordinary led me to a beautiful place of Love and Hope in Kingston, Jamaica. Little did I know then how my life was about to change.

Everyone I met there had left an unforgettable mark in my entire experience. Let me share a bit of how each one of them had inspired me in one way or another.

At first, I felt a bit worried knowing that I will be traveling alone to a place that I have never been to before. I do not know anyone from there. But somehow, peace had taken over me upon my arrival at the airport. In spite of my mixed emotions, the only thing that I held onto is God's faithfulness to His words and promises that He will never leave me as I do the mission.


And He sent me an angel to affirm to me that He is with me every step of the way. A kind woman had asked me what I was there for. Perhaps, I must have obviously appeared to be a first timer in Jamaica. She happened to be just standing before me while we were making our way to the immigration post. "I came here for a mission", was all I said with a sense of peace and excitement this time. Her eyes lit up and her lips curved a wide smile. "Oh, really? Tell me ALL about it." And we talked for like almost an hour after that. She never left my side until the brothers arrived to fetch me. She even offered me her cup noodle so I have something to eat if I ever get hungry. Through her, I got the message clearly. I was purposely called to experience an amazing mission.

I am grateful to have met and worked with 5 other volunteers during the mission. There was a wife/mother who temporarily left her family to serve at the centers for 2 weeks. She was like the mother of the group too. Also there was the father-and-son tandem, who left the comfort of their home and chose to spend their thanksgiving serving the needy. The father was a pediatrician and the son was a 17-year-old swimmer/basketball enthusiast who could be elsewhere enjoying his school break. But they were there for the mission too. Lastly, there was this lovely couple who was newly married and decided to spend the last few days of their honeymoon vacation to do the mission. Imagine that! I do not often meet beautiful people with such passionate and humble hearts. It was really refreshing to me.


Before going for the mission, I had browsed over the video clips about the missionary. What stood out to me was the dedication of these brothers who gave up their lives and all that they have in the service of the poor and the needy. True enough, I, myself, witnessed the loving services they extend to the people under their care. I was deeply moved by their compassion and selflessness. Everyday they put the residents' needs ahead of their own. Only true love can make such enormous sacrifices.


Through each day that I worked with them, I have come to see the amount of Love I am to give away as I heed to God's call of loving the least of my neighbors. Thanks to the daily mass and prayers too for it has sustained everyone with the strength and grace needed for the works.


While working with the sisters, I was attracted to the kind of life they were called to live. They reminded me of Mother Teresa of Calcutta, who is one of the great people I look up to in life. Each one of them does little things with so much love. I have seen inexplicable Peace and Joy in their faces, something that I rarely see in my world.


Each resident I met there taught me a thing or two. I remember one child who really caught my attention. He was from the Bethlehem center. I liked calling him Bob Marley. It was Sunday and I had volunteered to work with young boys. I was going from crib to crib to greet the kids when I heard a little voice saying "Hi". It was audible enough for me to turn around and look to its direction. It was from a cute boy extending his arm to reach for me. I went near him and touched his face. He then locked my hand in between his cheek and shoulder. He was so adorable.


Seconds later, I was called by one of the brothers to help dress up another child. I tried to pull my hand but Bob would say "No" as loud as he could. I went nearer to him. Then, I realized Bob has no legs. He only has one arm too. For a minute there I was glued to my place. How can I ever leave him? So I carried him around to wherever I went. Being with Bob throughout the mass was a joy to me. I felt that it meant the world to him to be with me. It's the least that I can do for the kid. His smile was like reaching the sky. It was priceless!


I also loved working at the Faith center. I thought that since I didn't have the chance to serve my father as he died when I was a kid, I may as well serve through the residents there. It was a different kind of experience altogether:  helping them, talking to them, listening to their stories, singing Christmas carols and playing with them.


That day I realized that there is a bigger world out there, that there is a greater calling for each one of us to look beyond our own little life. Though I struggle with my own problems, they are nothing compared to the needs of the people in the centers.


Yes, I decided to do the mission not only because I wanted to help the brothers and sisters in their works for the poor, but also because I, myself, needed help. I needed all of them to remind and show me what True Love means. And, indeed, I found True Selfless Love through the Missionaries of the Poor. I took away with me more than what I could ever give and share. My life is now changed forever. Truly,


"The call to serve the Poor is an invitation to Happiness"
- Fr. Richard Ho Lung, MOP, Founder

Thank God for each beautiful soul I met during my mission! Everyone was awe-inspiring!

Thank you too to all those who helped me gather things to be shared to the residents, brothers and sisters! May God bless your generous hearts! 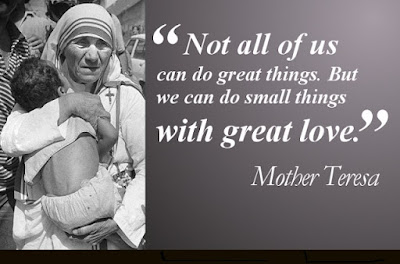